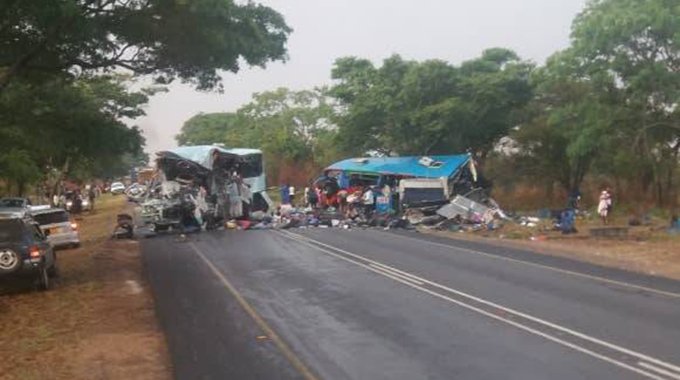 47 people — 45 adults and two children — were killed, while 70 others were injured when two buses collided head-on at the 166-kilometre peg along the Harare-Mutare Highway yesterday evening.

The accident involving Bolt Cutter and Smart Express buses occurred at around 5.30pm.

By the time of going to press, Asst Comm Nyathi said police were still attending the accident scene and the number of deaths could rise.

The accident occurred at Torish Farm, about 3km outside Rusape.

“The accident occurred at the 166km peg on the Harare-Mutare Road, just after the Rusape tollgate drifting towards Harare,” said Asst Comm Nyathi.

“The accident involved a Bolt Cutter bus that was heading towards Mutare which collided with a Smart Express bus which was going to Harare. Police are still attending the accident scene.”

District medical officer Dr Tendai Nyafesu said the general hospital mortuary had the capacity for 16 bodies but can be stretched to accommodate 36.

“This is horrific,” said Mr Museka, who was coordinating the transportation of the bodies and the injured to hospital.

“It is not something easy to accept and we are very saddened by this sad development in our district. I cannot say much as I am running around with this burden.”

When The Herald crew arrived at the scene, the road had been rendered impassable with bodies, the injured and their luggage was strewn all over the place.

According to an eyewitness, the driver of the Smart Express bus was trying to overtake a haulage truck and encroached into the lane of the oncoming bus, resulting in the head-on collision.

The driver and conductor of the Smart Express bus survived and are said to have fled the scene.