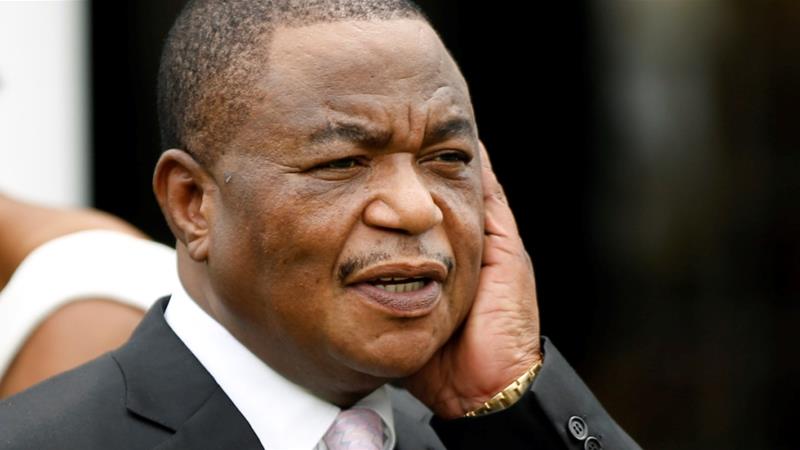 VICE-PRESIDENT Constantino Chiwenga has reportedly been airlifted to South Africa for treatment after his condition took a turn for the worst mid-last week, according to News Day Zimbabwe.

Sources privy to the goings-on said  Constantino Chiwenga, the power behind the removal of former President Robert Mugabe last year and the rise to power of President Emmerson Mnangagwa, was taken ill after being forced to abandon a Cabinet meeting on October 2.

The Vice-President and his wife, Marry, have been showing signs of illness with, visibly swollen hands.

“Chiwenga is in South Africa now for treatment. He was airlifted there last week,” an insider said.

There were also unconfirmed reports that Marry, whose hands have also shown signs of swelling, forcing her at some point to wear gloves, was in the neighbouring country to seek medical attention.

“All issues to do with the President or the Vice-Presidents’ affairs are disclosed by the Deputy Chief Secretary to the President and Cabinet for presidential communications, Cde George Charamba. I urge you to talk to him for comment on VP Chiwenga’s condition. He [Charamba] works very closely with the Presidium and he will be better suited to give you the state of affairs,” Mutodi said.

On Moyo, Mutodi said: “Minister Moyo is back in the country and recovering from home. He will, however, continue to see his doctors in South Africa and might visit them again this week.”

Moyo, an army general who took part in the November putsch against Mugabe, was hospitalised at an unnamed SA hospital on Thursday afternoon.

Charamba confirmed Chiwenga was in South Africa but said the Vice-President was undergoing a “routine” check-up for “historical” health issues.
“I am not sure it’s an admission or a check-up. You will remember he and his wife were affected by the White City Stadium incident,” Charamba said.
Although Charamba could not divulge where Chiwenga was being treated, reports in South Africa indicated he was being admitted at Netcare Hospital in Woodhill, Pretoria.

Chiwenga, Vice-President Kembo Mohadi, Defence minister Oppah Muchinguri and Marry were some of the high-profile political figures affected by an attempted assassination on Mnangagwa in June at a Zanu PF campaign rally in Bulawayo.

“You also may want to know that historically, he had a bullet lodged in his lungs from the war period.

“He was shot in combat at Chiduku [West of Rusape]. The other thing is he has told me he had not taken leave in the past five years and the gruelling election we’ve just gone through. He needed to fend off fatigue. We are expecting them back sometime this week,” Charamba said.

As reports of his illness and changing skin colour swirled early this year, Chiwenga publicly revealed that he had picked up an “illness” during Operation Restore Legacy that forced Mugabe to resign last November.

“Today, we want to set the record straight on one issue, now that journalists are here. When we did our operation to normalise things in the country, I was with General [Phillip Valerio] Sibanda and many others. They are brave men, indeed.

I had this skin disease [nhuta] that affected my whole body from beneath my feet to my back and the journalists started saying I was using skin lightening creams, but that was not the case. I was sick,” the Vice-President, a career soldier who commanded Zimbabwe’s military for almost a decade and a half, said.

V.P Constantino Chiwenga suggested he was paying the price for removing Mugabe, triggering speculation he might have been poisoned.

“I have decided to talk about it because that is what you see, but you should know that everything that happens, comes with a price,” he said.