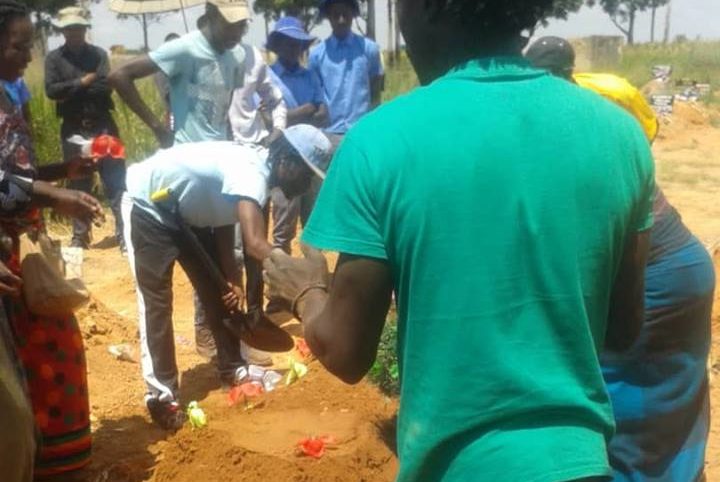 IN a reincarnation of a South African fake resurrection miracle, a Highfield family had to abandon burial for their deceased child, Dephine Mutemeri after being assured by prophetesses that their dead relative was still alive.

The family which lost a Form Four girl could not continue burial rituals at Granville Cemetery yesterday after two apostolic women came to the cemetery claiming that the girl was still alive.

Residents were still gathered by the family house late last night in anticipation of witnessing the FIRST Lazarus moment in Zimbabwe.

The two prophetesses had beefed up late last night with the addition of a madzibaba and they vowed to have accomplished their mission of raising the dead girl to life overnight.

The family had to take the body of Dephine Mutemeri home after being misled by the prophets that the girls was alive.

Several theories carried the day with the major theory suggesting that the girl was alive and had taken two glasses of water after the resurrection.

Some said the burial had been stopped due to commotion while others insisted that the family wanted to have a proper burial that had been disturbed.

Police had to be called in to disperse the crowd which wanted to witness the miracles at the family home in New Canaan in Highfield while the family gave way to the prophets to ‘raise’ the girl from the dead.

Dephine died after complaining of a headache and her body was taken to Runyararo Funeral Parlour for two days and on the burial day, all drama ensued which saw the family leader stopping funeral proceedings as some relatives insisted that the prophets could have been telling the truth.

“The girl’s uncle could not continue with burial ritual as some sections believed that the girl was still alive.
“The uncle was under a lot of pressure and he could have bowed down to pressure for fear of the backlash that he could have buried a living person.

“He had to order the hearse to drive to Southlea Park Police Base fleeing from mourners who demanded that the resurrection miracle be conducted,” said a family member who preferred anonymity.

They insisted that Dephine was removed from the coffin and went home with others after being brought to life by the two apostolic madzimai who insisted that she was alive.

To add weight to the theory, several mourners insisted the coffin be opened so that women of God conduct rituals to raise Dephine.
“We went to Southlea Park Police Base with the body and the women could not raise the girl and we then proceeded home for further rituals after insistence that the girl would resurrect,” said a family member.

The family member said it had been works of evil spirits and the girl would be brought to life by the prophetesses.

Some family members insisted that the girl was dead but succumbed to pressure from mourners that Dephine was alive prompting them to abandon burial.

“Some family members insisted that the girl was really dead but because of divisions they just thought of postponing the burial.

“Time was also running out so the only other option was to go back home.
“Burying Dephine could have been a Herculean task considering the number of people who insisted that the girl was still alive,” a family member said.

In many African traditions, when a grave is prepared, it is taboo that the pit is left open overnight without family members guarding it.H-METRO