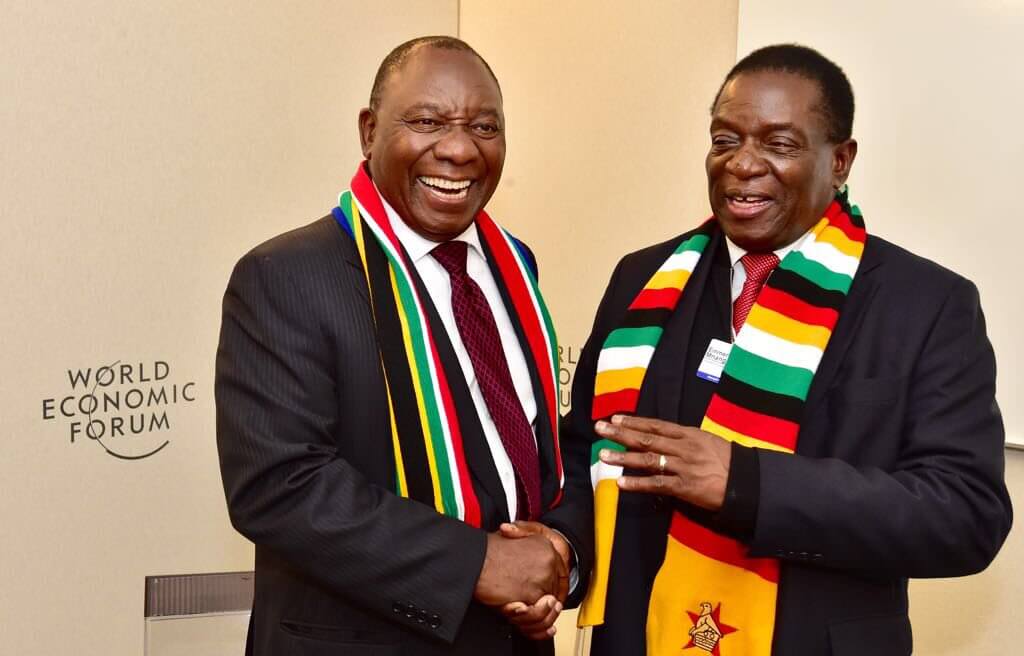 An accidental fashion accessory is helping President Emmerson Munangagwa rebrand the country – and distance himself from his predecessor Robert Mugabe and his 37-year rule.

Since the Davos summit in January, Emmerson Munangagwa is hardly ever seen without a scarf in the colours of Zimbabwe’s flag around his neck – no matter the temperature.

It was perfect for the freezing Swiss mountain village in mid-winter – and the Mr Emmerson Munangagwa proudly wore it during a BBC interview, later tweeting a clip of it saying, “Zimbabwe is open for business.”

But the scarf now has a life of its own, beyond the World Economic Forum – and even has its own hashtag #EDscarf.

Mr Emmerson Munangagwa, popularly known by his initials ED, got his hands on the scarf by chance when a mother-and-daughter fashion start-up contacted the Ministry of Foreign Affairs on a Saturday before the Zimbabwe delegation left for Davos.

There had been much hype ahead of the summit with Zimbabwe’s new leader anxious to attract urgent investment to revive an economy that has been on its knees for the last decade.

“We called and were like, ‘We’ve got these products, we’re not sure how you can use them.’ And the next thing you know the president is wearing the scarf… It was really such a shock on our end,” Celia Rukato told the BBC’s Newsday programme.

She said it was one of the first products she and her mother, Hesphina Rukato, produced when they formed their company in 2014 – and it was sold, with little fanfare, at a curio shop at Zimbabwe’s Harare International Airport.

Pride in the scarf chimes with the #ThisFlag social media movement of 2016 that protested against Mr Mugabe’s rule and the dire economic situation.

It was launched by a pastor angered by the state of the nation. He posted a video on Facebook of himself wrapped in the Zimbabwean flag, explaining why the colours were significant.

“They tell me that the green is for the vegetation and for the crops. I don’t see any crops in my country,” Evan Mawarire said.

“The yellow is for all the minerals – diamonds, platinum, chrome – I don’t know how much of it is left; I don’t know who they sold it to and how much they got for it.

“The red they say that is the blood that was shed to secure freedom for me and I’m so thankful for that – I just don’t know that if they were here, they that shed their blood, and saw the way this country is that they would demand their blood be brought back.”

Before Mr Mugabe was ousted, vendors were even banned from selling flags without authorisation.

But during the unprecedented protest days before Mr Mugabe’s resignation, the flag was everywhere – around the necks of many Zimbabweans, no matter their political party.

Following the scarf’s outing at Davos, it has become a must – near enough a uniform with slightly different designs – for those representing the country abroad.

For the Rukatos the success of the scarf feeds into their ambition to start a debate about creating a national dress for Zimbabwe.

“One of the things we’ve noticed over the years is that most nationalities have a national dress and Zimbabweans have not had anything.

So the scarf is just one of the things we’re beginning to put out there,” Hesphina Rukato told journalist Hopewell Chin’ono.

For the scarf, things have also got a little more political because of the president’s passion for it. At nearly every campaign rally for the ruling Zanu-PF party – whether or not it is cold – he is seen with it around his neck.

It has even got the head of the electoral commission into trouble, when a photo of her posing in the scarf with its creator, Celia Rukato, next to her began circulating on social media.

Priscilla Chigumba said the photo was taken before she was appointed in January to head the Zimbabwe Electoral Commission (Zec).

“That scarf was designed by a brilliant young Zimbabwean girl who then approached a group of us when I was a high court judge to say, ‘Look I’ve designed this scarf in an effort to build national consciousness.’

And I did want to support her, and I was very grateful for the present that she gave me and I took a picture,” she told Zimbabwe’s Capitalk FM earlier this month.

It didn’t help that one of the Zec chair’s aides said last month it was must have been faked – not realising it was an old photo.

“He obviously thought in his mind it must be a Photoshop as he knew I’d never jeopardise the image of the commission,” Ms Chigumba said.

Despite the controversy, the scarf remains popular – and a bestseller for the Rukatos.

One young man returning to university in neighbouring South Africa last week wanted to buy one of the last ones for sale that day for $24 (£18) at Harare’s International Airport.

“Of course I wouldn’t wear it in Harare at home – but it looks cool in Port Elizabeth,” he said.
BBC