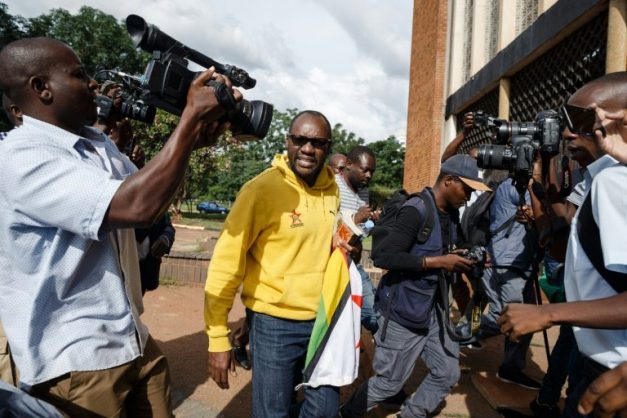 Pastor and activist Evan Mawarire charged with subversion was released on bail after more than a week on Wednesday and said he needs a doctor — as do hundreds of people still in jail with wounds from beatings by security forces.

Evan Mawarire was freed after nightfall, one of more than 1,000 people arrested in a government crackdown on protests over the country’s shattered economy. He faces 20 years in prison if convicted.

Wrapped in the national flag and carrying a Bible, he told reporters that President Emmerson Mnangagwa’s government is behaving like that of former leader Robert Mugabe.

“Once again we have to run and hide. It breaks my heart,” Mawarire said. “I was locked up with over 300 young men whose limbs were broken after being beaten by soldiers and police. It is a tragedy, it is a shame. There are 16-year-olds who have been locked up.”

Pastor Evan Mawarire did not give details about his own health but called conditions inside the jail “obviously not the best.” It was not clear whether people in the facility on the outskirts of the capital, Harare, were receiving any kind of medical care.

Lawyers have said people have been crammed into jails around the country and subjected to “mass trials” since the crackdown began on the protests against a dramatic rise in fuel prices that made gasoline in Zimbabwe the world’s most expensive.

Doctors have said 12 people were killed in the crackdown and more than 300 wounded, scores with gunshot sounds.

Zimbabwean authorities have deflected the allegations against security forces, blaming “bogus elements” in stolen uniforms and asserting that the political opposition is the cause of the unrest.

Hopes of reform under Mnangagwa, who took office in late 2017 after his mentor Mugabe’s ouster, have evaporated for many Zimbabweans. They had turned out by the thousands to cheer the military during Mugabe’s departure, but since then soldiers have been deployed with deadly results.

The scenes in the past two weeks make it even more challenging for Mnangagwa to attract foreign investment and other aid that is badly needed to rebuild the collapsed economy.

Pastor Evan Mawarire, accused of inciting violence online, denied he wants to topple the government but said he would continue “fighting” for authorities to fix the country.

“Every Zimbabwean has no choice but to continue with the struggle,” he said. “It is us who will fight for our nation. We are forced to fight. There is no choice for us.”
AP