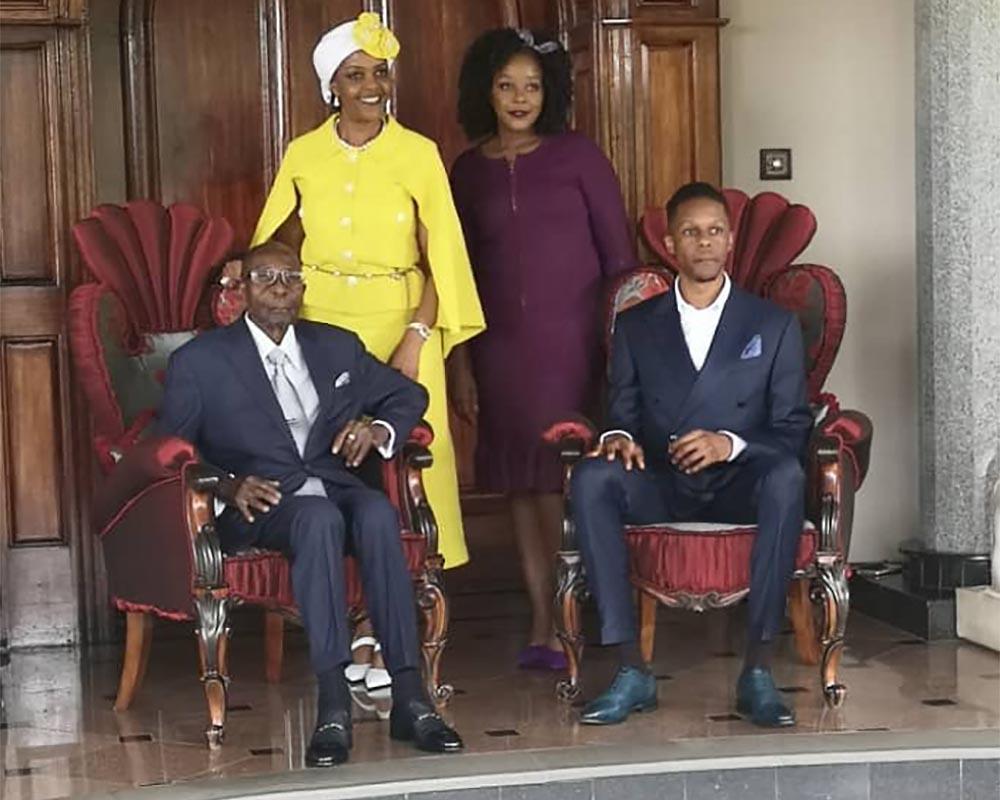 Robert Mugabe may no longer be president, but vestiges of his rule still remain in Zimbabwe.

Two streets in the capital city of Harare and the second-largest city, Bulawayo, are named after him. In early November 2017, the main airport in Harare was renamed in his honour to Robert Gabriel Mugabe International Airport.

The joke on the streets of Harare at the time was that the “honour” was fitting for Mugabe, as he was frequently airborne and never at home. In fact, he had become the airport’s number one traveller.

In supermarkets, products from Mugabe’s dairy business, which are branded “Alpha and Omega”, are in the refrigerators and make their way into the baskets of shoppers. His dairy farm produces ice cream, yoghurt and milk.

On Thursday, citizens were again reminded of the former strongman, who was in power for 37 years before his rule was abruptly cut short by a military coup: he turned 95.

His birthday is officially recognised as a public holiday. The recognition came after a push by the Zanu-PF Youth League, which wanted an honour, similar to those in neighbouring countries, bestowed on Mugabe.

The youth league at the time cited the recognition South Africa gives to Nelson Mandela and Botswana to Sir Seretse Khama, the respective founding fathers.

But since his removal from office, the spectacle and fanfare that usually accompanied Mugabe’s birthday is gone and not even leaders of the youth league, once his most ardent defenders, still stand by him.

Godfrey Tsenengamu, the political commissar for the youth league, said no major public event was lined up for Mugabe’s birthday.

“As the national youth league, so far we have not organised anything nationally,” he said.

Jealousy Mawarire, the spokesman for the National Patriotic Front and Robert and Grace Mugabe’s spokesman, hinted that a private function might be hosted at the Blue Roof mansion, Mugabe’s private residence in Borrowdale, Harare, this weekend.

“If there is something official I will let you know,” he said.

However, it was confirmed from a person who received an invite that a private dinner function would indeed be held at the Mugabe house this weekend to celebrate his birthday.

Away from the public glare, only his Gushungo Holdings company placed two full-page advertisements in the private media today to congratulate him on turning 95.

Traditionally, state media would have run swathes of supplements on his birthday. Parastatals, government ministries and companies would fall over each other advertising congratulatory messages, a huge financial spin-off for the media. Failure by any big entities to congratulate the president on his birthday was frowned upon as a sign of disloyalty.

The annual interview Mugabe usually gave to the state broadcaster, the Zimbabwe Broadcasting Corporation, on the eve of his birthday has disappeared from television screens. Although often treated with kid gloves by the reporter conducting the interview, the media keenly followed Mugabe’s birthday interview to tap into his thinking on a wide range of issues, particularly the succession question, which plagued Zanu-PF in the final years of his rule.

Jacob Mafume, the national spokesperson for the Movement for Democratic Change (MDC), said the sidelining of Mugabe by the state showed “how the mighty have fallen”.

Now, 15 months after his removal from office, memories of Mugabe are mixed on the occasion of his birthday.

The economic sting which is prevailing in the country has made some citizens longingly look back at the days Mugabe was in charge. Inflation is at 56.9%, the highest in a decade. International data and forecasting group Trading Economics expects it to reach 70% by the end of March.

Blessed Zhou, a vendor who plies his trade outside a liquor store along Harare Street, is one of those who told TimesLIVE that he misses Mugabe.

“We remember him, Mugabe, as a caring president, because he allowed us to sell our wares in the streets. Now we are being chased away by the military and police daily,” said Zhou.

“Mugabe empowered us to be self-sufficient, but this so-called new dispensation is disempowering us. I am not afraid to say we miss Mugabe. Police now patrol this street three times a day. We can’t breathe.”

Nelson Chamisa, the MDC president, earlier this week said Mugabe, at his worst, was not like President Emmerson Mnangagwa. Last month, the army was deployed to quell protests which broke out following a fuel price hike.

Human rights groups have put the death toll at 17 and estimate that more than 1,000 people suffered various human rights violations. Chamisa made the comments to reporters at the trial of Tendai Biti, the MDC’s deputy chairman.

“We are also aware of the targeting of many of our leaders across the country… lawyers and doctors, which is quite disturbing, because even Mugabe, at his worst, was not this rabid. We never saw attacks and persecution of lawyers and doctors,” said Chamisa.

Mugabe is gone but is still hard to forget in Zimbabwe.
Timeslive

Related Topics:FeaturedRobert Gabriel Mugabe
Up Next

The Independent Group: Who are they and what do they stand for?