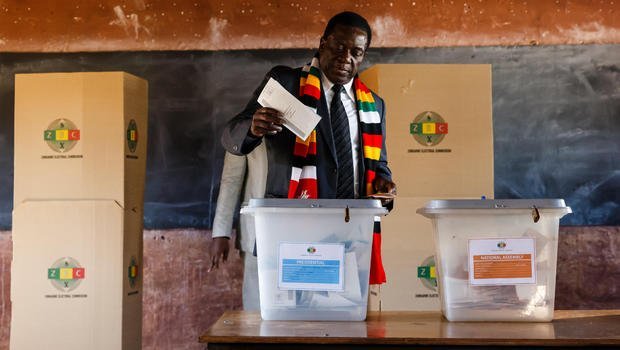 Foreign observers have hailed the election as an opportunity for Zimbabwe to break with its repressive past.

The presidential election is expected to be a tight contest between the incumbent Emmerson Mnangagwa and his main rival Nelson Chamisa.

Parliamentary and local elections are also taking place on Monday.

Opinion polls give Mr Mnangagwa, who heads the ruling Zanu-PF party, a narrow lead over Mr Chamisa, who leads the MDC Alliance.

Both leaders are running for the presidency for the first time.

On Sunday, Mr Mugabe, who first came to power after independence in 1980, said he would not vote for his successor.

Mr Mugabe, regarded as one of the last “Big Men” of African politics, was forced out of office last November by Mr Mnangagwa with the help of the military.

In Domboshawa village, about an hour’s car ride north of the capital, Harare, many had been in the queue even before sunrise.

The first group of voters were mainly elderly people but there were some youngsters too.

A local primary school has been converted into a polling station for the landmark election.

Surrounded by mountains and rolling hills, the villagers are in good spirits, chatting and laughing.

But the stakes are high. Zimbabwe’s future is in the balance and nothing is certain.

It has been a hotly contested race but there is an air of optimism, unlike the nervousness I’ve witnessed covering previous elections here.

“This election is different, there hasn’t been violence. It’s a good sign,” one voter told me. After casting his vote, he say his prayer is that whoever wins, puts Zimbabwe first. “We have suffered enough,” he says as he walks off on to the winding dirt road.

How were candidates received at polling stations?

Crowds whistled and broke into chants of “Chamisa” when the 40-year-old MDC leader cast his ballot on the outskirts of Harare, amidst a media scrum.

“We will win this election to the extent it’s free and fair… it’s a done deal,” he told the BBC.

In contrast, Mr Mnangagwa, thought to be 75, voted in a quiet polling station at a school in the central city of Kwekwe.

At one stage, he was seen taking his head out of the voting booth to check where he should put his cross on the ballot.

He tweeted that Zimbabweans should vote with “peace in our hearts”.

“We will sink or swim together,” he added.

Who makes up most of the voters?

The country is expecting a high turnout of first-time voters.

Younger voters are expected to be key – almost half of those registered are under the age of 35.

Hundreds of international observers have been deployed to ensure the vote goes smoothly, but the opposition has repeatedly alleged irregularities in the voter roll.

They have also expressed concern over the security of ballot papers and voter intimidation in mainly rural areas.

However, the Zimbabwe Election Commission (Zec) insists that it has acted within the law, and will deliver a credible poll.

“The voter turnout is high and we are confident that by 7 pm central African time we would have completed the voting process at all polling stations,” she added.
BBC

Mnangagwa and Chamisa both upbeat