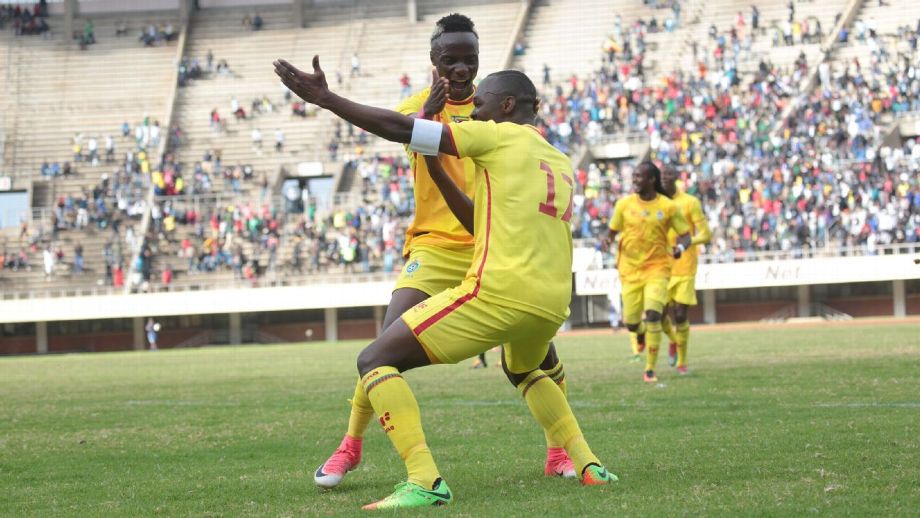 Ronald Pfumbidzai and Knowledge Musona scored either side of the break to fire Zimbabwe to an improbable 2-1 win over the Democratic Republic of Congo in Africa Cup of Nations qualification.

Substitute Yannick Bolasie netted an injury-time consolation for the hosts, whose cast of European-based stars largely struggled to break a defiant Warriors rearguard.

Bloemfontein Celtic left-back Pfumbidzai, standing in for the injured Devine Lunga, rifled the ball home from inside the box after the DRC defence failed to clear Khama Billiat’s 21st-minute free-kick.

Captain Knowledge Musona doubled the advantage 20 minutes from time, moments before he was red-carded for a second bookable offence.

The victory left Zimbabwe three points clear of the DRC atop Group G, with Congo-Brazzaville now also back in contention after their 3-1 win over Liberia on Friday brought their points tally to four.

The DRC were threatening to overrun Zimbabwe early on as they thoroughly dominated possession, but it must have been a good omen for Sunday Chidzambwa’s men that the hosts were struggling to consistently create some clear-cut chances.

They did threaten, with China-based forward Cedric Bakambu’s powerful close-range header being parried over for a corner by goalkeeper George Chigova.

Despite being forced to play on the back foot though, Zimbabwe had their own bright moment inside the opening quarter-hour as Knox Mutizwa volleyed over from a promising position.

The lively DRC crowd were then stunned as Pfumbidzai opened the scoring against the run of play.

Bakambu had a great chance to bring his side level but shot wide of Chigova’s far post after a great through ball from Gael Kakuta on 35 minutes.

Chidzambwa had started with a central-midfield partnership of Danny Phiri alongside the returning Marvelous Nakamba, and the duo did a sterling job protecting the defence.

The centre-back partnership of Teenage Hadebe and Alec Mudimu also looked resolute for much of the contest, and right-back Tendai Darikwa, who was making his competitive debut for Zimbabwe, was equally impressive.

Victory has put Zimbabwe in a great position to finish in the top two and qualify for the Cameroon finals regardless of the result in the return leg at the National Sports Stadium in Harare on Tuesday evening.

Liberia host Congo-Brazzaville on Sunday looking for their first win of the campaign.

Related Topics:FootballGallerySportsZimbabwe National Team
Up Next