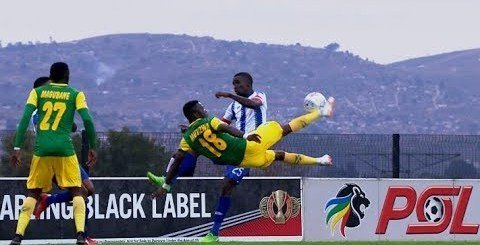 It took a wonder goal from Knox Mutizwa to inspire Arrows to victory, and here’s how the country reacted to that fabulous strike.

What an amazing goal to open the account for the brand new Premier Soccer League season!

Lamontville Golden Arrows beat Maritzburg United 2-0 in the KwaZulu-Natal Derby on the weekend.

It was an excellent result against a United team that promises so much after a brilliant last season.

Arrows downed their arch-rivals 2-0 thanks to goals from Mutizwa and Lerato Lamola to emerge victorious in the derby for the first time since 2010 at Harry Gwala.

Both coaches, Clinton Larsen for Arrows and Fadlu Davids for Maritzburg handed debuts to their new signings.

As expected Davids opted for Keagan Buchanan in the place of departed Lebohang Maboe. The attacking midfielder signed for Sundowns on Friday.

Siyanda Zwane also made his first start at right back for Arrows on his return to the club that launched his career back in 2005. He gave a solid performance.
Divine Lunga also got the taste of Premiership football at left back for Abafana Bes’thende after signing from Zimbabwe‘s Chicken Inn.

The weather and the pitch were immaculate. The spirit of the derby was evident from the word go as tackles were flying from the onset.

The referee, Phillip Tinyane, was called on to act on numerous occasions during the early stages of the game. Siphelele Ndlovu was at his best once again. He toyed with Arrows with his silky skills in the first half.

Larsen reacted to the pressure that Arrows were piling as he replaced Thabo Molefe and Siphamandla Sabelo. He brought in Nkanyiso Cele and Siphelele Magubane as he tried to gain momentum in the midfield.

The Team of Choice were all over Arrows and asking more and more questions. Surprisingly it was Arrows who took the lead with the momentum of magic from Knox Mutizwa in the 75th minutes.

Knox Mutizwa executed a brilliant bicycle kick to put his side in the lead, in what could easily be the top contender for the goal of the season.

The goal came from nowhere. Danny Phiri tried to unleash a shot from distance and the ball was blocked by Siyanda Xulu and fell in the path of Knox Mutizwa.

Gumede was the difference between Arrows and the victory as he pulls off another brilliant save with 12 minutes before the final whistle to keep his side in the game. He was chosen as the man of the match after the game.

Davids went all out for the equaliser when he sacrificed the defender, Bokang Tlhone and introduced Deolin Mekoa.

Ndlovu missed another sitter in the dying minutes of the match as he smashed his shot off target.

United created numerous clear goal scoring opportunities to win the match but they left their scoring boots in their training ground which next to Harry Gwala.

The Team of Choice went for broke as they tried to snatch the equaliser and Lerato Lamola punished them to put the match to bed.
IOL Sport