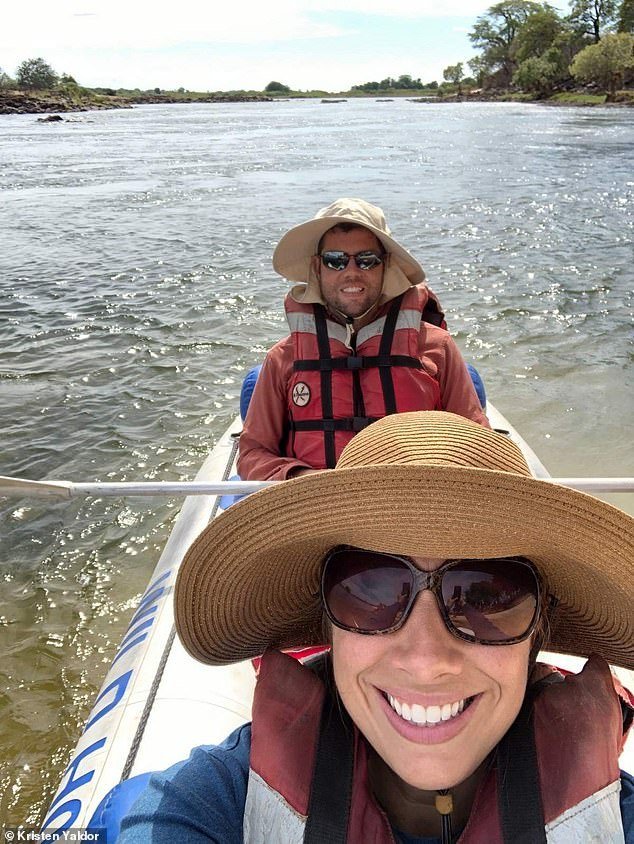 Kristen Yaldor, a Florida woman, 37, is tossed from her canoe by an angry hippo and has her leg broken after it dragged her underwater during dream Zimbabwe vacation.

For Kristen and Ryan Yaldor, what started out as a dream vacation to Zimbabwe to celebrate the wife’s birthday ended with the woman’s leg being broken by an enraged hippopotamus in the Zambezi River.

The Odessa, Florida, couple were canoeing with a pair of tour guides near Victoria Falls on Saturday morning when their vessels got too close to a hippo calf submerged in the water.

Before the Yaldors knew what was happening, the baby hippo’s mother swam under their boat and threw it in the air, causing Kristen and Ryan to be ejected into the water.

The husband was able to swim to a nearby island, but the massive hippo clamped its powerful jaws down on the wife’s right leg and pulled her under.
Kristen somehow managed to free herself from the animal’s maw and make her way to safety despite sustaining a broken femur in her thigh.

According to the husband speaking to Tampa Bay Times, it took an hour for a medical helicopter to pick them up, and another 13 hours to airlift them to a hospital in South Africa, where Kristen Yaldor remained in intensive care Tuesday.

Ryan’s mother, Martine Yaldor, told the paper her daughter-in-law was fortunate that one of the hippo’s massive incisors did not bite into her femoral artery, which would have caused her to bleed out.

Zimbabwe National Parks and Wildlife Management Authority spokesperson Tinashe Farawo confirmed Saturday’s incident and issued a reminder to all tourists to be ‘extra careful’ and stay away from wild animals.

Several local news outlets quoted an unnamed eyewitness claiming that the Yaldors came too close to the hippo, causing the animal to panic and attack their canoe.

But according to the Yaldor family, Kristen and Ryan did nothing wrong and followed their tour guides’ instructions.

‘I almost felt like they were going, “Ha ha, here’s another stupid American tourist,”’ Martine said of the press coverage in Zimbabwe.

Ryan’s mother is a South African national and he has travelled to the continent multiple times. For his wife, it was her second trip to Africa.

The Yaldors, who both work for their family’s Florida-based phone and Internet provider PBX-Change, booked the canoe trip down the Zambezi River through the Zimbabwe tour operator Wild Horizons.

Ryan told the Times that the tour guides did not warn them about the calf in the water.

As they were floating own the river, the guides noticed some hippos up ahead on the right and instructed the couple to move to the left.

The husband’s uncle claimed the tour company alleged that the American tourists were told to swim to an island in the river, but Ryan said his wife was thrown directly in front of the adult hippo and immediately dragged under, giving her no time to swim to safety.

The husband also claimed that their guides’ cell phone and radio did not work, which caused a delay in the arrival of the medical helicopter.