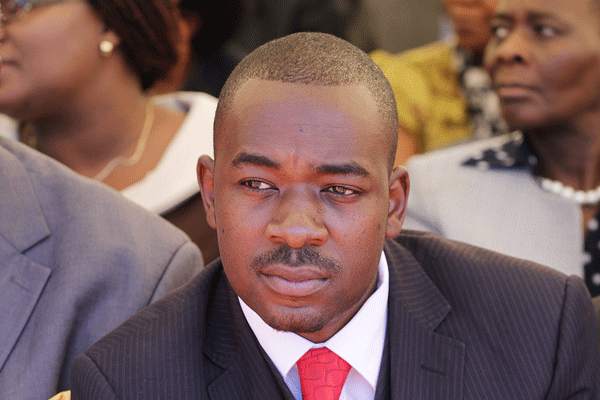 OPPOSITION MDC-T and MDC Alliance presidential candidate Nelson Chamisa (pictured) yesterday raised alarm and literally pressed the panic baton after the Zimbabwe Electoral Commission (Zec) for the second day running allegedly declined to give him an electronic copy of the voters’ roll, claiming it was not yet ready.

This came amid reports that the ruling Zanu PF party and officials at the British and American embassies had already received soft copies of the roll.

“We still don’t have the voters roll. Our people have been told to wait 48 hours. We are struggling to understand why Zec is frustrating our attempts to access this important document,” Chamisa tweeted yesterday. The previous day, Chamisa had reportedly tried in vain to obtain the roll.

“Zec continues to refuse to release the voters roll. Worse still, the chairperson (Priscilla Chigumba) has now shifted goalposts and says they are printing hard copies. We require an electronic copy; we have made this very clear. What are they trying to hide?” he queried.

Chamisa’s spokesperson, Nkululeko Sibanda last night insisted that Zec had not released the voters’ roll to the MDC Alliance president and other candidates in the coalition.

“We went there in the morning and were told to sign for the voters’ roll and come back and check after 48 hours,” Sibanda said.
But Zec acting chief elections officer, Utloile Silaigwana said all candidates who visited their offices yesterday had been issued with a copy of the voters’ roll and warned Chamisa against “politicking” over the issue.

“I can confirm to you that all candidates who visited our offices today have been given copies of the voters’ roll. Those who did not come, we did not give them,” Silaigwana said.

On Monday, Zec chairperson Justice Priscilla Chigumba told journalists that the commission was printing copies for candidates who successfully filed their nomination papers to participate in the presidential, parliamentary and local government elections.

“One can only pick anomalies if there is something to compare with. Zec should simply respect the court order and release the voters roll that was inspected,” ERC director Tawanda Chimhini said.

He said the quest for a free, fair and undisputed election should have started with political parties receiving the provisional voters’ roll inspected last month so that they factor in their input to be considered when making the final roll.

Zec has been accused by opposition parties of deliberately delaying the release of the voters’ roll as part of the rigging process on behalf of the ruling Zanu PF, an allegation the commission had denied.