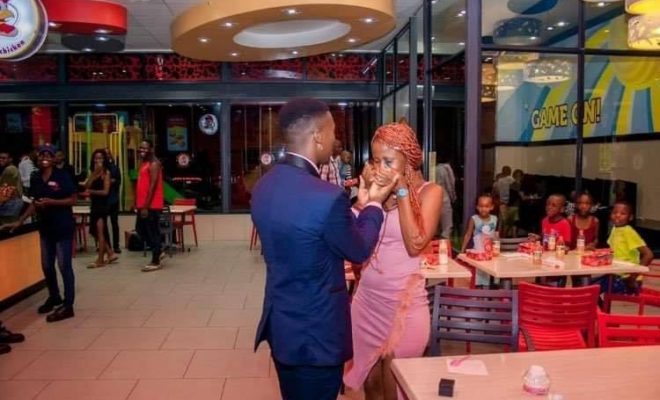 When Makhosana Mguni (27) went on bended knee to propose to his sweetheart Belinda Nyoni (24) at Chicken Inn Drive Thru in Bulawayo he never thought this would ignite a spirit of giving from all corners of the country.

The couple lives in Bulawayo’s Nketa 6 and the proposal happened on December 26.

Their photo went viral as many people admired the gesture made by Mguni in taking the bold step of asking the love of his life for her hand in marriage.

However, no matter how kind and noble one is, there are always some people who will take the opportunity and be social media trolls.

They were ridiculing Makhosana Mguni for choosing a fast food outlet.

However, what they did not know, said Mguni, is that Chicken Inn has some sentimental value as this was the place he first met Nyoni six years ago.

“It wasn’t actually the Chicken Inn at ZITF where we met; we met at the one on 8th Avenue. We live in the same neighbourhood and I had always admired her from afar and got the opportunity to talk to her on that day.

That’s the reason I chose to do my proposal at Chicken Inn because it has a lot of sentimental value for us as a couple,” said Makhosana Mguni.

Fortunately, the Internet trolls were quickly dismissed by the majority and their misgivings were soon drowned in the voices of those who celebrated the newly engaged couple.

Some companies and individuals have gone as far as offering wedding services for them such as a wedding dress, make-up, free vehicle hire, live streaming, photo-shoots, even food for their wedding and the like just to hop onto the euphoria.

Moviehouse Ster Kinekor were the first to jump on as they offered the lovebirds a Cine Prestige cinema and 44 of their friends and relatives for them to celebrate while watching a movie of their choice.

Chicken Inn asked people to tell them what they want the outlet to do for the couple and most suggestions were that the food outlet should pay for the couple’s entire wedding, pay for lobola and also make them brand ambassadors for a year or life.

A Facebook page called The Belinda and Makhosana Love Story has been set up and has nearly 1 000 followers.

The couple denied owning or running it although a statement posted on the page thanking people was theirs.

“We shall set up a Facebook page that’s official. The one that’s there isn’t ours. The statement that was published is one that we made, though we don’t know where whoever’s running the page got it,” said Makhosana Mguni in an interview.

The couple, in their statement, said they were surprised that there were people trolling them.

“As you might have probably heard, we are just a young couple from Bulawayo. When we got engaged, it was a gesture of pure devotion and commitment.

We did not think it would be the highlight of social media ‘trolling’ but hey, all things work together for the good. When Jesus says ‘yes’, who can say ‘no?’” said the couple.

“Ster-Kinekor Zimbabwe, we are truly grateful for the way you stood up and dared to be different just for us. When most laughed at us, you guys turned the ship around.

We do not know how to thank you. To everyone who is showing their support through commitment and pledges, Zimbabwe needs more people like you. May God richly bless your businesses because it’s not easy to help a stranger but you guys are doing it for us.”

The couple said the dates for the lobola ceremony would be announced as they were being negotiated by both families.