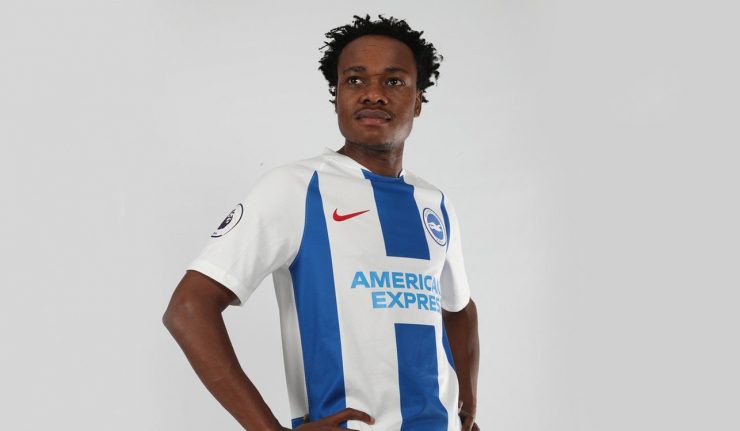 Percy Tau became one of South Africa’s most expensive exports when he penned a four-year deal with Premier League side Brighton & Hove Albion after leaving Mamelodi Sundowns on Friday.

While he is popular among football fans in South Africa, very few people beyond the Rainbow Nation know who the 24-year-old really is.

Percy Tau was born on May 13, 1994, in a family of eight children in Witbank, Mpumalanga. His older brother, Dumisani, is also a footballer for National First Division (NFD) side Royal Eagles.

Percy lost his brother Mogau Tshehla, who was also a professional footballer for Polokwane City, in a tragic car accident in February 2018, but to his credit, the attacker continued to give his all for the Brazilians.

That’s a sign of a young player, who may be small in stature, but who has the heart of a lion.

His mother, Elizabeth, had to raise all his eight children, including Percy, all by herself 1998, and while she was initially against the idea of him playing football, a young Tau wouldn’t hear anything of it.

He would literally cry whenever his mom didn’t want him to go play football with his peers!

Tau made his professional debut for Sundowns four years ago under the tutelage of Pitso Mosimane after being promoted from the club’s youth structures.

The first two seasons in the PSL were very difficult for him, as he could only manage six league appearances for Sundowns.

This led to Mosimane loaning him out to NFD side Witbank Spurs for the second half of the 2015/16 season. The coach wanted Tau to grow and find himself in an environment he was familiar with – the Mpumalanga province.

The move did wonders for Tau’s confidence, and he was back with a bang six months later to claim his rightful place in Mosimane’s starting line-up at Downs.

Percy Tau made his international debut for Bafana Bafana against Angola in the African Nations Championship (Chan) qualifiers in 2015. He scored his first international goal in an international friendly against Guinea-Bissau in March 2017.

Initially, he was often overshadowed by the much-talked-about CBD of Leonardo Castro, Khama Billiat and Keagan Dolly, but steadily his quality began to come to the fore within Mosimane’s selection.

The coach vowed to make Tau the best player in Africa soon after both Billiat and goalkeeper Denis Onyango scooped top awards at the 2017 Caf player awards ceremony, although even before that, he’d delivered glimpses of his class during Downs’ run to the 2016 Caf Champions League title.

Percy Tau went into the Fifa Club World Cup as one of Sundowns’ dangermen, and it was during that tournament the many people around the world began to recognise his talent and ability.

He’s got speed, skill and an eye for goal, and while he is naturally left-footed, he can also use his right without a problem.

Percy Tau is not the tallest of players (he stands at 1.75m), but he is strong aerially and often out-jumps his markers to score crucial goals.

He is a great asset to Brighton long term, and will be for whichever team he joins on loan during the 2018-19 season.
Goal.com