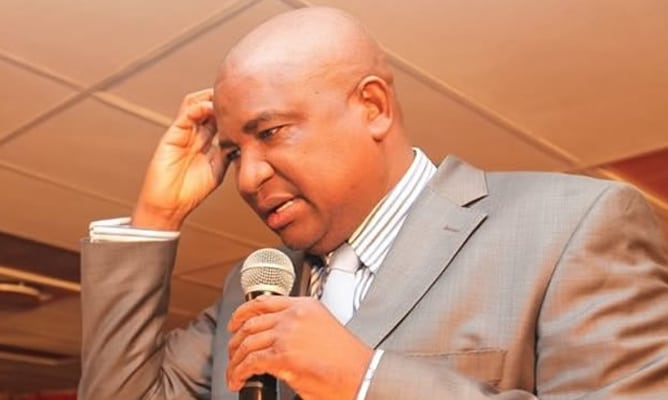 Constitutionally, the winner was supposed to garner at least two-thirds of the vote but after amassing 35 to Chiyangwa’s 24, the latter withdrew his candidature just before a re-run was about to be conducted.

Just like Philip Chiyangwa, incumbent vice-president Omega Sibanda also fell by the wayside as he lost to Gift Banda by 22-37.

The only survivor from the three men who were running the country’s soccer mother body’s affairs was Philemon Machana, who was elected into the board together with Manica Diamonds secretary-general Sugar Chagonda, Rodrick Chamu Chiwanza and Brighton Malandule.

“The board is made from heaven. I have no doubt the board will deliver. We have to make our mark, work hard for the development of football in the country. What we can promise the country is that we have not forgotten what we promised in the run-up to the elections.

“Just check our manifesto, we are going to deliver exactly what we said.”

Yet before the elections, Kamambo along with Banda had been disqualified from taking part in the polls by the ZIFA electoral college who cited some “flimsy” reasons.

But the pair took the case to FIFA which led to their re-admission into the race for the highest football office on the land.

In fact, the world’s soccer governing body FIFA yesterday sent three observers to see to it that the whole process was conducted in a transparent manner.

Kamambo and his newly-elected board know they are inheriting an association ridden with a heavy debt. He, however, maintained that through good governance, ZIFA will make big strides in offsetting that.

Of course, we will be focusing more on developing the game but at the same time, we know the fruits which corporate governance can bring. We will engage stakeholders and map the way forward. What we want at the end of the day is to see a vibrant system which brings success on and off the field.”

Harare City chairman Alois Masepe, an astute administrator himself, said Kamambo was a good leader who was capable of taking soccer in the country to the next level.

“Kamambo is a leader of repute. We have always called for development starting from the grassroots level. It is a welcome development that Kamambo, who has development at heart, has been elected the ZIFA president. He needs everyone’s support and as Harare City, we will back him as much as possible,” said Masepe.

“The new board must now get down to business and take our football to a certain stage of development . . . We can now start going back to watch football,” Makaza said.

Kamambo and his new board will also have to deliberate on the mooted August to May Premiership calendar which stakeholders rejected yesterday.

The stakeholders held their annual meeting before the elections.

The Premier Soccer League had written to ZIFA proposing for the alteration as they wanted the local season to be in line with professional leagues.

Already the Confederation of African Football has shifted the season for the CAF Champions League as well as the CAF Confederations Cup.

The change in the CAF calendar mid this year meant the PSL had to handpick representatives for the two competitions which started early this month.

While FC Platinum, who were the reigning league champions, took the offer to participate in the Champions League, the then Chibuku Super Cup holders Harare City rejected the offer, citing inadequate preparation time.

But the move by CAF to align their schedule with other international bodies prompted the PSL to consider changing the local season.

Modalities were already on the ground to ensure a smooth transition from the March to November to the August to May period, including a stop-gap tournament to keep the teams active between January and May.
But it was always going to be a tough task coming up with a unanimous position given a lot of factors needed to be considered before the shift.

And yesterday the gathering was a discordant lot with stakeholders divided over the matter.

Although the issue was not wholly thrown out of the window, no changes will be effected until at least after this coming season.

It was resolved that the next term as has been always the case begins in March and ends in November whilst deliberations on the way forward are discussed. Improper infrastructure in the country is the major area of concern for the mooted shift in season.

Not even a single stadium in the country has an effective drainage system to withstand the normally unforgiving peak rains, especially between December and March.

Given that the change would be blanket, it meant lower division leagues would have been left with no stadium to play on as most of their games are played on community grounds which are practically unplayable during the rainy season.

The same fate would have befallen the Women Soccer League not to mention spectators.

PLS chairman Farai Jere, who was elected into office in September this year, said the change is on course despite being shelved.

“Some councillors objected the shift in the season citing lack of proper infrastructure and some logistical issues.

“However, the change is still on, deliberations will be made going forward,” said Jere.