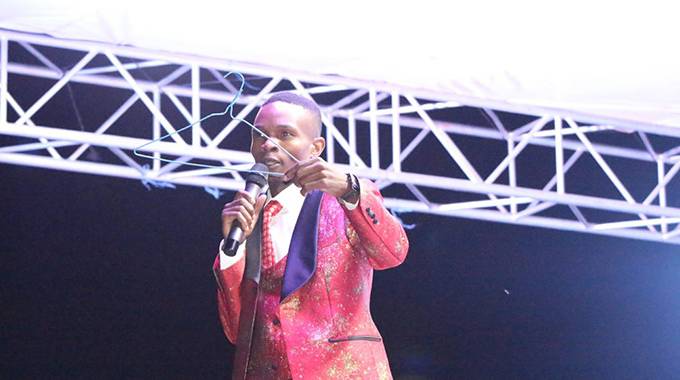 Prophet Miracle Paul’s spiritual hanger, which he calls spiritual magnet, has become a hit during his church services at Unit L Community Grounds in Chitungwiza.

The hanger has seen thousands of people flocking to this church to have a touch and have their problems solved.

Prophet Miracle Paul, who lead New Revelations Ministries, introduced the spiritual magnet at the beginning of this year and people are coming with testimonies.

The spiritual magnet took centre stage during a church service on Easter Monday where thousands attended and all wanted to have a chance to touch the hanger.

According to some of the congregants, the hanger is anointed that anyone who touches it and spells out their wishes or problems get results instantly.

“I am a testimony of this hanger. I came here when I heard of it with a friend who worships here.

“So when I visited and told Prophet Miracle Paul my problems, he just gave me the hanger and told me to say out my problems and I started receiving phone calls while I was still at church,” said one congregant.

Since Prophet Miracle Paul introduced this spiritual magnet numbers at the church have been increasing which he attributed to the testimonies, when contacted for comment.

He told H-Metro that he was given the hanger by God after prayers.

The charismatic preacher has become popular with one his miracle services – Abraham’s Tent – which are still being conducted.

“Others call it a hanger but to me it’s a spiritual magnet, I was given this by God after prayers because I wanted to help His people.

“This spiritual magnet is given to people who come to our church and it has helped a lot of women reconcile with their husbands. The good thing is we are getting testimonies and we always glorify God for that. We are receiving people from outside the country after seeing testimonies and this is good for God’s ministry,” said Prophet Miracle Paul.

Apart from the women with marital issues, the hanger also helps people with different problems as has been witnessed during services.

“We have seen people coming with different problems, some have complained they are having problems with people who borrowed them money and we gave them the spiritual magnet. Some of them came with testimonies,” said Prophet Miracle Paul.

Prophet Miracle Paul’s ministry has grown to the extent that he has since opened guest houses to accommodate foreigners and other people who are coming from around Zimbabwe.H-Metro

Related Topics:FeaturedProphet Miracle Paul
Up Next