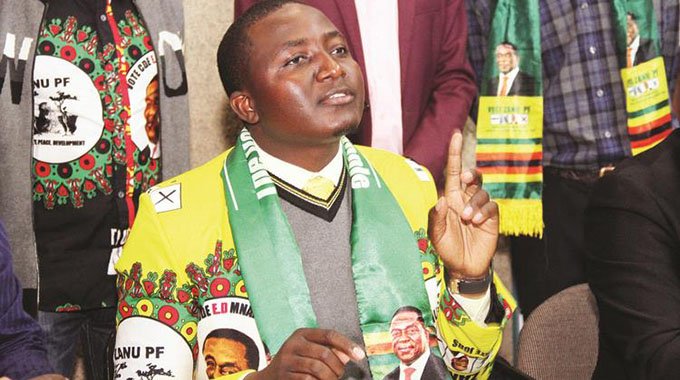 The Zanu PF Politburo yesterday removed secretary for Youth Affairs Cde Pupurai Togarepi from the post and suspended his deputy Cde Lewis Matutu and secretary for the Commissariat Cde Godfrey Tsenengamu for a year for indiscipline.

Cde Togarepi will, however, remain a Central Committee member, while Cdes Matutu and Tsenengamu will revert to being ordinary card-carrying members.

Cdes Matutu and Tsenengamu will be required to undergo rigorous training at the Chitepo School of Ideology for three months.

Acting secretary for Information and Publicity Cde Patrick Chinamasa said the Politburo unanimously decided that indiscipline within the party should not be tolerated.

“As such, he is no longer a member of the Politburo, but he retains his position as Central Committee member, as you all know, he serves in the Politburo at the pleasure of the President of our party and in this case, Cde Togarepi has been relieved from this position.

“Cde Matutu and Cde Tsenengamu have been immediately removed from their positions as deputy secretary for Youth League and Political Commissar, respectively, and this will be for a period of 12 months.

“This means they will be ordinary card-carrying members of the party and after 12 months, they will be eligible to stand in any elections to any position within the party.”

Cde Patrick Chinamasa told journalists after the 336th Ordinary Session of the Politburo yesterday, the first meeting in 2020, that the Politburo discussed at length issues around a Press conference held by Cdes Matutu and Tsenengamu, purportedly in their personal capacities.

During the briefing, the pair accused three prominent businessmen of corruption but did not give incontrovertible evidence implicating the trio.

“The Politburo took note of this irregular modus operandi which is alien to the party’s way of doing its business,” said Cde Chinamasa.

“It is also important to highlight that previously it happened and the Politburo deliberated and specifically gave a directive that the youth if they have any problems which are of significance to them, they should raise them in a proper forum.”

Cde Chinamasa said Zanu PF did not tolerate corruption in whatever form, by whomsoever.

He said anyone with information implicating anyone in corruption should approach the police so that the law takes its course.

“It is important, of course, to say and emphasise that the party does not condone corruption and as you are well aware, that it has set up structures both within the party and at Government level of which these can be approached,” said Cde Chinamasa.

“We basically invite and encourage our general membership that if they are witnesses and have evidence of any corruption against whomsoever, to raise these issues with the relevant authorities, in this case, the Zimbabwe Anti-Corruption Commission (ZACC), the Zimbabwe Republic Police (ZRP) and where they think it’s pertaining to senior party members, they should bring them to the party.

“Unfortunately, there has not been any evidence that has been brought to ZACC pertaining to any previous allegations and I am sure that even now, we will probably find out that the claims or allegations are unsubstantiated.

“So, in light of these developments, we felt that the departure from the violation of the directive the Politburo called for, was an act of indiscipline and that it called for severe punishment.”
The Herald