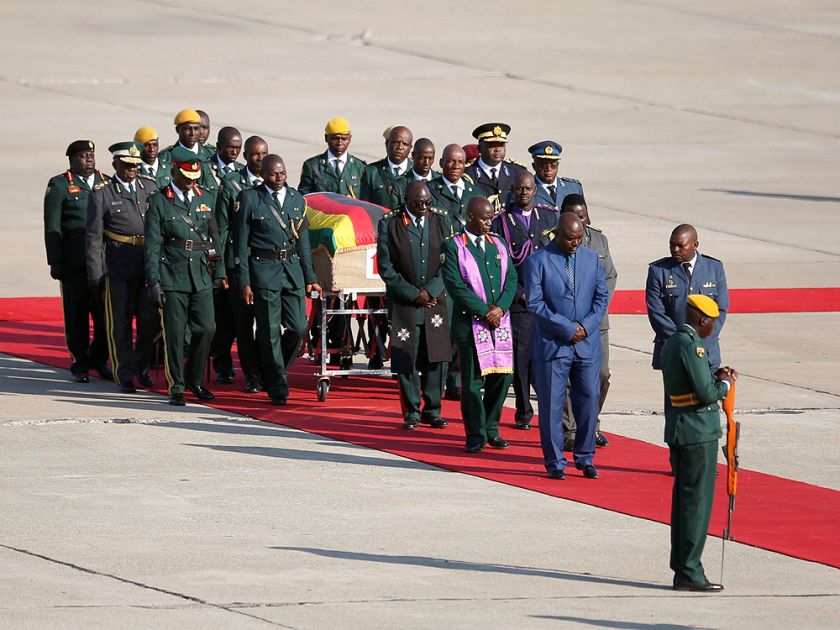 Robert Mugabe’s body has arrived home to Zimbabwe amid a flurry of controversy over his final resting place that underscores the bitter divisions between his family and the ruling party that turned against him.

Grace Mugabe, the tyrannical leader’s second wife, was met off the plane carrying the coffin, by President Mnangagwa, who replaced her husband after the 2017 soft coup that ended his 37 years of ruinous rule.

The body of Zimbabwe’s founding president, who died at a private clinic in Singapore last week at the age of 95, will be displayed before a public funeral service in the capital Harare on Saturday, which will be attended by a number of heads of state.

The location for his burial, scheduled for Sunday, has yet to be confirmed and risks embarrassing Mr Mnangagwa, who was Mugabe’s feared enforcer for half a century until he moved against him.

It is reported that before his death, an embittered Mugabe gave orders that he wished to be buried with family members in their rural village and not at Hero’s Acre, the national resting place he had built in the capital for heroes of the liberation war against the white minority rule.

Mr Mnangagwa, 76, is said to be applying pressure on the Mugabe family for the burial to take place in Harare as any other plan would humiliate him and the ruling Zanu-PF party.

Robert Mugabe’s body arrived mid-afternoon at Harare’s Robert Gabriel Mugabe International Airport, which was funded by the Chinese government. A military guard of honour stood at attention as the coffin was removed from the aircraft, draped in the national flag and accompanied by security chiefs.

“The entire nation of Zimbabwe, our people, across the board are grieved and are in mourning because the light which led us to independence is no more, but his works, his ideology will continue to guide this nation,” Mr Mnangagwa said from a podium set up under a white gazebo on the tarmac.

Mrs Mugabe, 54, was seated nearby, inscrutable under her thick veil. Her public falling out with Mr Mnangagwa has raised doubts about whether she will be able to live comfortably in Zimbabwe without the protection of her husband’s status.

At her side were her daughter Bona and Savior Kasukuwere, a former Mugabe-era cabinet minister and staunch ally who has been living in self-imposed exile in South Africa.

Crowds had gathered at the airport well before the scheduled arrival time, with some wearing T-shirts bearing Mugabe’s face and others with Mr Mnangagwa’s image, while music blared from loudspeakers. The Times.