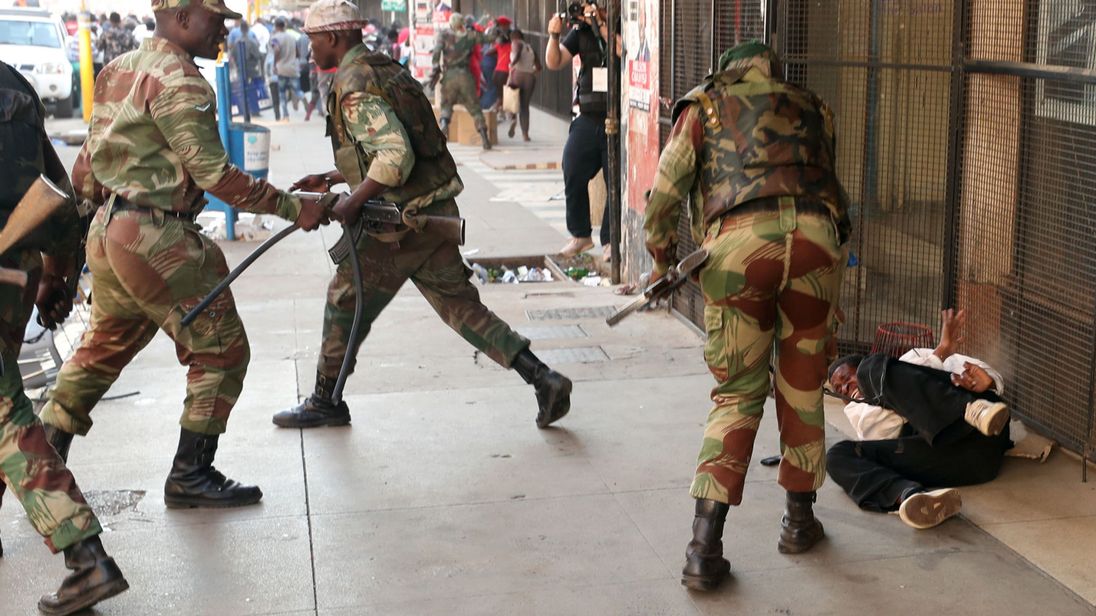 Businesses have shut in Zimbabwe’s capital, Harare, as the nation awaits the release of heavily disputed presidential election results.

Armed soldiers and police are on patrol, ordering people to “behave”.

Three people were killed in the city on Wednesday in clashes between the security forces and supporters of opposition leader Nelson Chamisa.

The elections were the first since long-time ruler Robert Mugabe was ousted in November.

The polls were intended to set Zimbabwe on a new path following Mr Mugabe’s repressive rule.

Mr Mnangagwa said the government was in talks with Mr Chamisa to diffuse the crisis and proposed an independent investigation to bring those who were behind the violence to justice.

“This land is home to all of us, and we will sink or swim together,” Mr Mnangagwa said in a series of tweets.

The Zimbabwe Electoral Commission (Zec) has declared Mr Mnangagwa’s Zanu-PF party the winner of the parliamentary election, with a two-thirds majority.

It has not released presidential election results, saying party agents were still verifying the result.

Zanu-PF, which has been in power for 38 years since the country gained its independence, denies there has been any rigging.

The US embassy in Harare also called for calm, saying the country had a “historic opportunity” for a brighter future.

“People must be guaranteed their right to protest,” he said.

No violence was reported on Thursday. A truckload of armed policemen and soldiers were driving around the city shouting, “Behave yourself, people of Zimbabwe.”

What happened after the vote?

ZEC’s announcement that Zanu-PF had won the parliamentary vote by a landslide prompted protests in Harare.

Home Affairs Minister Obert Mpofu said the government would not tolerate the protests.

The opposition “are testing our resolve”, he said, “and I think they are making a big mistake.”

A spokesman for Mr Chamisa condemned the deployment of soldiers and the subsequent loss of life.

“Soldiers are trained to kill during war. Are civilians enemies of the state?” he asked.

“There is no explanation whatsoever for the brutality that we saw today.”

Which results have been declared?

ZEC has announced all parliamentary results. Zanu-PF has won 146 seats and the MDC Alliance 62 in the 210-member National Assembly, the lower house of parliament.

More than five million people were registered to vote, and there was a turnout of 70%.

The state broadcaster had reported that Zec would announce the presidential results on Wednesday, but this did not happen.

On Thursday, Zec said the verification of results was “going very well”, but did not give a clear indication of when they will be released.

Zec has until Saturday to announce the result.

A presidential candidate needs more than 50% of the vote to win outright. Otherwise, a run-off election will be held on 8 September.

What are election observers saying?

The European Union mission criticised the delay in announcing the presidential results.

It said it had observed several problems, including media bias, voter intimidation and mistrust in the electoral commission, adding that there was an “improved political climate, but un-level playing field and lack of trust”.

This is the first time in 16 years that the government has allowed EU and US election monitors into the country.

The African Union mission has said the elections “took place in a very peaceful environment” and “were highly competitive”.

It added that it could not confirm opposition parties’ complaints of vote-buying, intimidation by the state and bias by traditional leaders.

A preliminary report by the Southern African Development Community (SADC) observers said the elections were largely peaceful and conducted in accordance with the law.
BBC

If Mnangagwa had won, he would have said so already:Chamisa

Soldiers and police clash with protesters in Harare