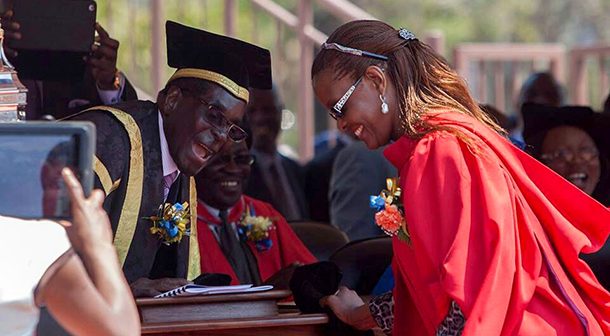 Suspended University of Zimbabwe (UZ) vice-chancellor Levi Nyagura yesterday said he was being wrongly charged for illegally awarding former First Lady Grace Mugabe a PhD, insisting that the latter’s husband, former President Robert Mugabe who was the varsity’s Chancellor approved and conferred his wife with the PhD.

Citing Section 8 of the University of Zimbabwe Act, Nyagura, through his lawyer Advocate Sylvester Hashiti, said a vice-chancellor was not responsible for the issuance of degrees.

Adv Hashiti gave the notice to subpoena the former President, his wife Grace and President Mnangagwa so that they give evidence as chief officers.
The defence argued that the PhD was still in existence, adding that the current Chancellor, President Mnangagwa had the powers to revoke it.

Nyagura yesterday appeared before magistrate Mr Lazini Ncube for trial after the Constitutional Court threw out his challenge in which he was contesting a decision by the Prosecutor-General to delegate his prosecutorial powers to Messrs Tapuwa Godzi and Michael Chakandida of the Presidential Special Anti-Corruption Unit.

However, through his lawyer, Nyagura filed an application for exception and quashing of an indictment on the basis that the proper and responsible persons have not been brought to court.

“The accused was never the chancellor and has never been one at any given time particularly at the time when the PhD in issue was conferred on Grace Mugabe.

“The chancellor is the chief officer of the university. The accused was the vice chancellor and his powers are set out in terms of Section 8 of the University of Zimbabwe Act and this section provides no powers to confer or award degrees of any sort. In terms of this section, he is an officer of the university and does not act in his personal capacity.

“At the relevant period, it was Robert Gabriel Mugabe who was the chancellor…Robert Mugabe is the answerable person and must instead face the charges. Accused is the wrong person to charge,” read part of the application.

“The charges by the State fail to consider three important facts. Firstly, the PhD in question remains extant. Its validity cannot be put in question by the criminal process and lastly the former chancellor Robert Mugabe approved and conferred the degree and transcript,” he said in his written application.

He further questioned why none of the other persons involved in the enrolment, tutelage, supervision, recommendation and conferment of the PhD have been brought to court.

“The cited sections (of the University of Zimbabwe Act) clearly denote where the power to confer degrees lies.

“If any degree is not awarded pursuant to proper conduct, the awarding and conferring authorities are the ones liable at law for the conduct. In the first instance, it would be the university, in the second, the chancellor and in the third senate or council depending on the facts of the matter.
“Nowhere does accused (Nyagura) come into it, especially in his personal capacity. The State cannot impute personal liability where the same has been deliberately excluded by law.

“The State has not led any evidence from any member of any committee or council or senate who took objection to the conferment of the degree in issue.”

“For a criminal charge to suffice, it must not only allege the commission of a crime but in terms of the Criminal Procedure and Evidence Act, must set out the facts and evidence that give rise to the charge itself.

“The charges and facts do not disclose any criminal offence and ought to be quashed on this additional basis. The accused prays that the charge be and is hereby quashed, the exception upheld and the accused acquitted,” read the application.

The State will file its written response today while oral submissions will be conducted on April 4.The Chronicle