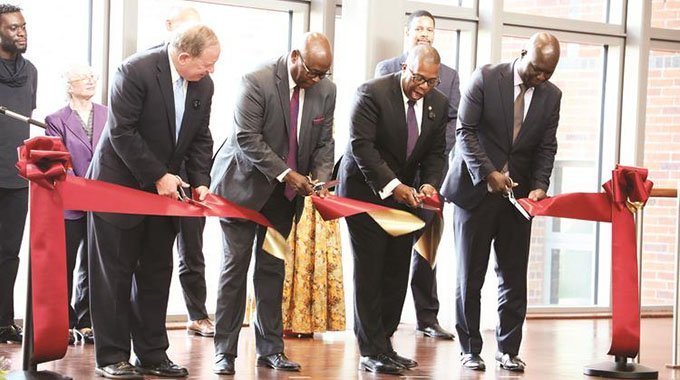 The United States of America opened its US$292 million embassy compound in Harare, a structural behemoth believed to be one its largest embassies in Africa and beyond.

US Ambassador to Zimbabwe Brian Nichols said the new embassy symbolised the United States’ ongoing and durable commitment to the people of Zimbabwe.

The US has, for the past two decades, maintained illegal sanctions on Zimbabwe that are responsible for massive de-industrialisation and increased investor risks since the global superpower also sanctions countries and businesses, including banks, that deal with Zimbabwe.

The US administration has not been equal to embrace President Mnangagwa’s re-engagement policy, despite Zimbabwe opening doors to dialogue and engagement.

In March, US President Donald Trump extended by another year an executive order that gives effect to the punitive regime, that is seen as an instrument to bludgeon the poor and effect change of Government in Harare.

A group of protesters has been picketing the new embassy demanding the removal of sanctions.

But Ambassador Nichols struck a conciliatory note yesterday, commending progress being made by Government to align the country’s laws to the Constitution and pledged to strengthen its partnership with Zimbabwe through trade and investment.

He said the US would build relations.

“In addition to structures, we built relationships across a network of service providers,” he said. “We look forward to deepening those relationships.

The United States aspires to strengthen its partnership with Zimbabwe and to expand trade and investment between our countries. Embracing political and economic reform is the key to achieving these goals.

“We are pleased the Government is moving toward repealing legislation that fails to align with Zimbabwe’s 2013 constitution. The right of Zimbabweans to express their views peacefully, to collectively bargain, and to choose their leaders via free and fair elections should never be infringed,” he said.

Ambassador Nichols called for a national dialogue on political, social and economic reforms to build confidence in a new Zimbabwe.

He said the new embassy was inspired by the architecture used in the construction of Great Zimbabwe.

“Senior great architecture enriches the people and society around it. The proud people of this land knew this truth a millennia ago when they laid the foundations of Great Zimbabwe, the land of kings, nearly 300 kilometres from here. And Great Zimbabwe served as the inspiration for this beautiful building.

“Our campus evokes Zimbabwe’s geography. The country’s wide open rural plains, known as the “veld” are distinguished by their gently sloping terrain, vast grasslands and tree cover. The canopy over the main entrance that draws its inspiration from the mbira dzavadzimu, or “voice of the ancestors,” a musical instrument that the people of Zimbabwe have played for thousands of years,” he said.

An American artist Yael Kanarek created the hanging art with the words ‘Night’ and ‘Day’ in 19 languages spoken in Zimbabwe.

Ambassador Nichols expressed his appreciation to Government and the City of Harare for their support and co-operation during the construction of the structure.

Ambassador Mathema congratulated US President Donald Trump and the people of America and said the construction of the new complex in Zimbabwe was a sign of a beautiful future between the two countries.

“The construction of this building shows what good relations we have and what beautiful thoughts we have about each other.

“We hope for the best all the time. It is a good sign and shows the US is going to be here forever,” he said.

United States director, Bureau of overseas buildings operations, Mr Tad Davis said he was proud of this new embassy’s eco-friendly features which pursue resiliency, energy savings and sustainability goals, that aim to reduce the overall environmental impact, while optimizing building performance, to enhance the self-sufficiency of the campus.

“This embassy not only demonstrates our long term commitment to partnership with the people of Zimbabwe but enables us to advance prosperity, security and stability as mutual goals in line with our Africa Strategy. May this occasion serve as a platform to further enhance and strengthen the co-operation between the United States of America and Zimbabwe,” he said. The Herald

Kirsty Coventry stands up to Cosafa