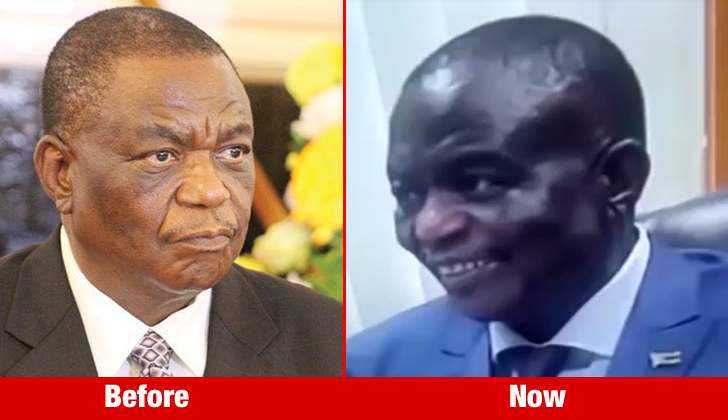 Zimbabwe’s vice president, Rtd General Constantino Chiwenga, is suspected of suffering from the lethal polonium- 210 poisoning and is reportedly admitted at an undisclosed Indian military hospital, Spotlight Zimbabwe, has been told.

High level sources in the defence ministry this week disclosed that Chiwenga was rushed to India aboard a private plane through the Manyame air base in the capital, for “urgent treatment” and “tests of any possible unidentifiable poisons” as military intelligence officials suspect the former Zimbabwe Defence Forces (ZDF) boss, could have ingested the poison administered using food by his political enemies.

Chiwenga’s medical rescue efforts are said to have involved top officials from India’s armed forces and the Zimbabwe army, and that India’s president, Ram Nath Kovind, had called the VP to check on his progress in treatment and health.

Chiwenga paid Kovind a visit last year in March, as a special envoy of President Emmerson Mnangagwa, to explain the regime’s new dispensation policy following the overthrow of the former leader, Robert Mugabe, in a military coup in November 2017.

“Number 2 (Chiwenga) was rushed to an Indian military hospital following suspicion that he could have been poisoned with some kind of dose of a lethal poison or military grade nerve agent during the November coup period,” said the sources.

“Military intelligence officials are not taking any chances. The fact that medical doctors in Zimbabwe and South Africa have failed to explain his exact ailment, made them believe that he could have been made to ingest polonium -210 using food by his enemies, which is very difficult to trace in the human body and only nuclear scientists have the expertise needed to trace it.”

Polonium-210 is a rare radioactive metal discovered by Marie Curie in the late 19th century. While radioactive, it emits a high-energy form of radiation, but the particles do not travel far and it decays relatively quickly. Curie named the chemical element after her country, Poland.

Polonium-210 is also a known carcinogen (a substance capable of causing cancer in living tissue). When inhaled, it causes lung cancer, and if swallowed, it becomes concentrated in red blood cells, before spreading to the liver, kidneys, bone marrow, gastrointestinal tract, and the testicles or ovaries, according to medicalnewstoday.

The deadly poison was infamously used to kill the former Russian spy, Alexander Litvinenko, in London in 2006. He died of radiation sickness. Litvinenko is alleged to have swallowed a fatal dose of Po-210 by drinking tea at a business meeting with two other Russians. Both were charged with his murder.

Last year opposition politician and activist, Elliot Pfebve, made stunning revelations that the late prime minister and MDC-T leader Morgan Tsvangirai may have been poisoned using a poisonous metal isotopy allegedly bought by the ruling Zanu PF party from Russia, which is similar to polonium-210, to eradicate the opposition leadership.

“Tsvangirai may have been poisoned, in the same way, Mnangagwa was poisoned. In 2014, I received a tip-off that Zanu PF bought a poisonous metal isotopy from Russia destined to eradicate opposition leadership.

“It is similar to Polonium 210 which killed Alexander Litvinenko in London but a slow reactive poison than Polonium 210 that takes time to kill its victim by inducing cancer.

This may have explained why recently Mnangagwa came out open on what doctors told him, of a poisonous metal found in his body, which can only be found from 2 military governments of the world, Russia and Israeli,” Pfebve said.

Ironically it is Chiwenga who reacted with speed to Mnangagwa’s alleged poisoning, by sending a helicopter to airlift him from a party rally in Gwanda, and then further to South Africa for emergency attendance.

Mnangagwa is thought to have survived the poisoning, through the skin of the teeth, as he received early medical treatment and because the poisonous metal found in his system was quickly removed.

Local online media and the mainstream reported this week that Chiwenga was in India for treatment, with confirmation from the information ministry, which described his ailment as a “minor abdominal ailment”.

Another online publication, ZimLive, said the second in charge had reportedly undergone esophageal manometry, “used to measure the strength and muscle coordination of one’s esophagus when they swallow”.

There has also been speculation of witchcraft claims as the source of Chiwenga’s affliction, while other reports have linked his medical woes to skin cancer. Chiwenga has been in and out of the hospital in Zimbabwe and South Africa. Only last week the VP was at Cape Town’s Groote Schuur Hospital.

Another high profile world leader, thought to have succumbed to polonium-210 is the late Palestinian leader Yasser Arafat, according to a Swiss forensic report obtained by Al-Jazeera.

Arafat’s official medical records say he died in 2004 from a stroke resulting from a blood disorder. But his body was exhumed in 2012 amid continuing claims he was murdered.

Working with MisRed was a marvel: JP