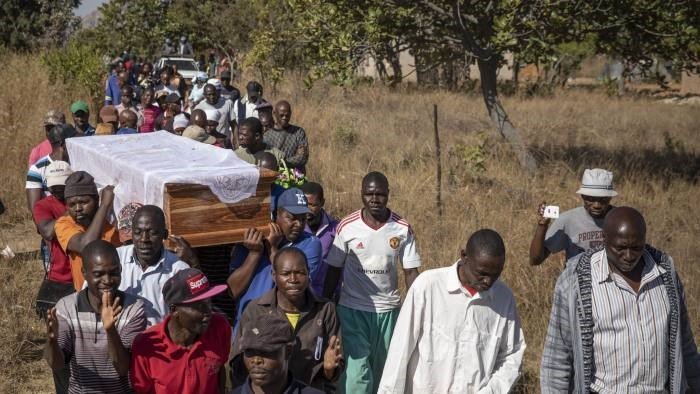 The four children of a fruit-seller gunned down by Zimbabwean soldiers in post-election violence wept uncontrollably at the sight of their father lying in a casket under a baking sun.

Ishmail Kumire, 41, was one of the six victims of Wednesday’s bloody chaos, sparked when troops fired on opposition activists protesting alleged electoral fraud.

The father of four, known as “Shuz”, was buried on Saturday in the village of Chinamhora, 45km northeast of Harare, watched by 200 mourners.

His fellow vendors swept into the yard of his home, packed into a minibus emblazoned with the words “I am blessed”, alighting drumming and dancing.

Kumire’s death carries a bitter irony. According to his brother Steven Matope, the fruit-seller was not among the opposition protesters angrily claiming that the ruling Zanu-PF had stolen the election.

Instead, he was caught up in the violence because he had stayed at the scene of the protest to protect his fruit.

“Ishmail was a vendor, he wasn’t a political activist,” Matope said.

His funeral came a day after Zanu-PF’s president Emmerson Mnangagwa was declared the winner of Zimbabwe’s historic elections, the first since veteran autocrat Robert Mugabe was ousted by the military last year.

Mnangagwa had hailed the polls as a chance to consign to the past Mugabe’s repressive 37-year rule, but Wednesday’s crackdown was a brutal reminder of the violence of his era.

‘Killing for no reason’

“If the ruling party is killing the people it is supposed to govern, I don’t know who it is going to rule. That’s very painful,” Matope added.

“He was just selling his tomatoes,” he said of his brother.

Kumire’s brother-in-law Ignatious Neshava, who witnessed the shooting, told AFP how soldiers swooped on them as they stood guard over his wares, fearing that $700-worth of freshly-purchased produce would be looted amid the chaos.

“He was standing five metres from me and suddenly I heard gunshots. I thought the Zimbabwean soldiers were firing rubber bullets,” said Neshava.

“I turned around and saw Ishmail on the ground, face-down. I saw a cartridge next to him and then, as I tried to turn his body, a soldier came and pointed a gun at my head.

“By that time, Ishmail was bleeding profusely.”

Neshava was sure he was going to be killed too.

“How can they deploy Zimbabwean soldiers in town, killing people for no apparent reason?” he asked, as the wooden casket was lowered into the ground.

Local leader Backshow Matope was also in Harare when the violence flared.

“I saw one woman being shot dead along Samora Machel Avenue,” the 62-year-old said.

“It is very painful that this happens shortly after we voted – what’s the point of voting if as soon as you finish voting, your relative is killed?”

“I have nothing that I’m able to do, I’m unemployed. He didn’t want me to work, saying he was able to take care of his family,” she said, sobbing.

“I can’t even take over his job. How am I going to look after these children? Tell me, how? He used to do everything for his children .”

Kumire’s brother Douglas said civilians in Zimbabwe were “like animals in a game park”.

‘There is a crisis in Zimbabwe’

“The same Zimbabwean soldiers who removed Mugabe and we celebrated are now being sent to kill people after we voted.”

As opposition leader Nelson Chamisa pressed on with his claim that the election was rigged, Bishop Guide Makore of the Christian Marching Church prayed for divine intervention.

“There is a crisis in Zimbabwe. Lord hear our situation, speak to Zimbabwe, speak to the executive, to the judiciary,” said the clergyman.

“We are appealing to the African Union, to the Southern African Development Community, to the Commonwealth to help come to our rescue.”

In Harare, Jinty Rubenstein was mourning her brother Gavin Charles, who leaves behind a 13-year-old daughter.

“My brother was shot twice, in the arm and in the pelvis – he was shot like a dog,” she said.

“He wouldn’t hurt a fly. My family fought for this country and they shoot my brother like a dog”
AFP