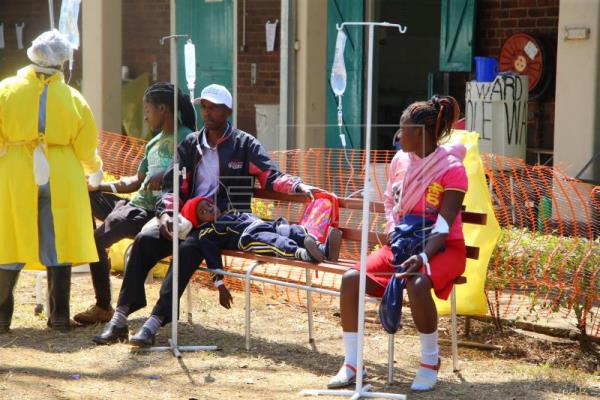 Authorities in Zimbabwe’s capital, Harare, banned public gatherings as part of efforts to contain a cholera outbreak that has killed 21 people over the past week.

In a statement issued on Wednesday, Zimbabwe Republic Police spokeswoman Charity Charamba asked residents to “take heed” of the ruling, which came after health officials identified more than 3,000 suspected cases of the waterborne disease.

“The government has declared the cholera outbreak in Harare a state of emergency, meaning that it is also a threat to human security,” Charamba said.

Outbreaks of cholera occur regularly in Zimbabwe because of dilapidated water and sanitation facilities. Informal housing areas without running water have mushroomed and basic infrastructure has collapsed after years of neglect.

Examination of water samples from some wells and boreholes in Harare, home to swaths of slum-like housing, tested positive for contamination with the disease.

On Tuesday, Health Minister Obadiah Moyo declared a state of emergency in the city. “The number of cases are growing by the day,” he said, adding the outbreak was caused by “blocked sewers”.

Cholera, which can kill within hours if untreated, is caused by the consumption of food or water contaminated with the bacterium Vibrio cholerae.

According to the World Health Organization, it is “easily treatable” and even preventable if there is “universal access to safe drinking water and adequate sanitation”.

More than 4,000 people were killed by the disease during an outbreak in Zimbabwe a decade ago.

Newly installed President Emmerson Mnangagwa, who has pledged to revive Zimbabwe’s ailing economy and improve public services, said officials were working to “contain and overcome” the most recent outbreak.

“I urge all residents of affected areas to exercise extra care with their hygiene & follow the instructions of the authorities,” Mnangagwa said in a Twitter post on Wednesday.

Under former leader Robert Mugabe, who was in power from Zimbabwe’s independence in 1980 until being removed from office by the military late last year, corruption and economic mismanagement were endemic.

Amnesty International said the country’s most recent outbreak of cholera was a consequence of its “failure to invest in and manage both its basic water and sanitation infrastructure and its healthcare system”.

“It is appalling that in 2018 people are still dying of such a preventable disease,” Jessia Pwiti, Amnesty’s executive director for Zimbabwe, said in a statement on Wednesday.

“No lessons were learned from the 2008 epidemic and the outbreak and deaths we’re seeing now is symptomatic of a still broken-down sanitation infrastructure and poor sewer management, worsened by a shortage of drugs and medical supplies,” she added.

Last month, 47 African countries committed to ending cholera outbreaks by 2030 at a WHO Regional Committee for Africa summit in Senegal’s capital, Dakar.

“Cholera is a symbol of inequity. It’s an ancient disease, which has been eliminated in many parts of the world. Every death from cholera is preventable,” Matshidiso Moeti, WHO director for Africa, said.

In 2017, more than 150,000 cholera cases were reported in 17 countries throughout Africa, according to the WHO.

Related Topics:FeaturedZimbabwe Cholera Outbreak
Up Next