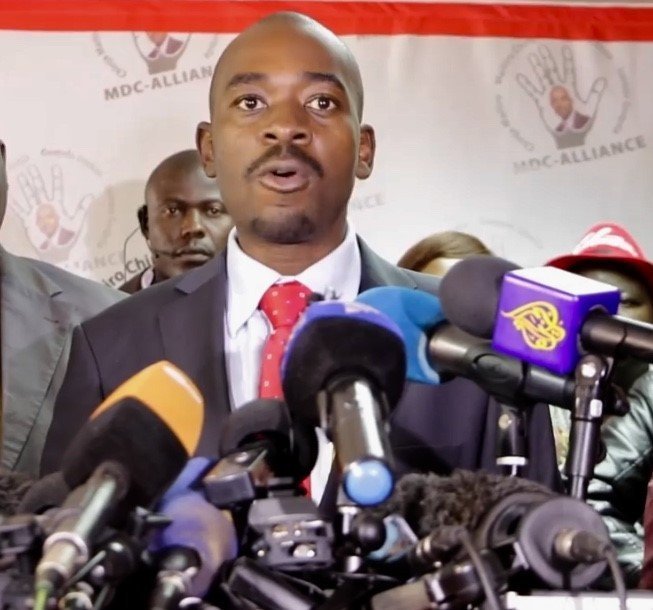 MDC Alliance leader Nelson Chamisa has ruled out a boycott of the seven-member alliance in next Monday’s Zimbabwe election‚ even though he expressed strong reservations around the credibility and transparency of the polls.

Supporters gathered outside the party headquarters cheered Chamisa for his decision to participate in the election.

At the heart of the tiff is the clash between the MDC Alliance and the Zimbabwe Electoral Commission (ZEC).

The alliance accuses the ZEC of refusing to give it access to the voters roll and refusing to let it see the ballot paper — which‚ among other things‚ it believes will mysteriously see an X cast for Chamisa disappear and move to the box allocated to the incumbent‚ President Emmerson Mnangagwa.

Chamisa is the strongest contender to Mnangagwa and was tipped by a recent poll by Afrobarometer to be trailing by only 3%‚ at 37% of votes compared to Mnangagwa’s 40%. The ZEC said that 5.6-million people are registered to take part in the election.

Chamisa urged citizens to turn out in large numbers next week in order to break the rigging mechanism that the ruling Zanu-PF had set up.

“This is the only way to ensure democratic change and to put an end to Zanu-PF’s stolen victories of the past,” he said.

The growing tensions ahead of the poll were apparent‚ with water cannon trucks and riot police dotted across parts of the Harare city centre.

The increased police presence was in anticipation of the MDC Alliance defying a police ban against its plans to picket at the electoral commission’s offices until voting day.

At the sidelines of commissioning a mine in Mhondoro-Ngezi yesterday, Mnangagwa said Chamisa was a “little boy” and his government would not hesitate to act should the MDC Alliance resort using violence to get into power.

“If he chooses chaos‚ then law and order will prevail. If you are peaceful‚ we will not touch you‚” Mnangagwa said.

John Dramani Mahama‚ the head of the Commonwealth Observer Mission to Zimbabwe‚ appeared to express sympathy with the demands made by the MDC Alliance.

He said no electoral demand was unreasonable and it was up to the Zimbabwe Electoral Commission “to listen and address demands if they are within the ambit of the law”.

The spokesperson for the UN High Commissioner for Human Rights‚ Liz Throssell‚ meanwhile welcomed the widening of the democratic space in Zimbabwe.

“The presence of some international human rights organisations‚ in addition to the Zimbabwe Human Rights Commission and the Zimbabwe Gender Commission‚ to monitor the human rights environment around the upcoming national elections is also a welcome sign,” she said.

“There has also been the worrying use of disparaging language against female political candidates.

We call on the authorities – and political parties and their supporters – to ensure that the elections are not marred by such acts so that all Zimbabweans can participate free from fear in a credible election process.”
Timeslive

The curtain closes on election campaigns as Zimbabwe prepares to vote