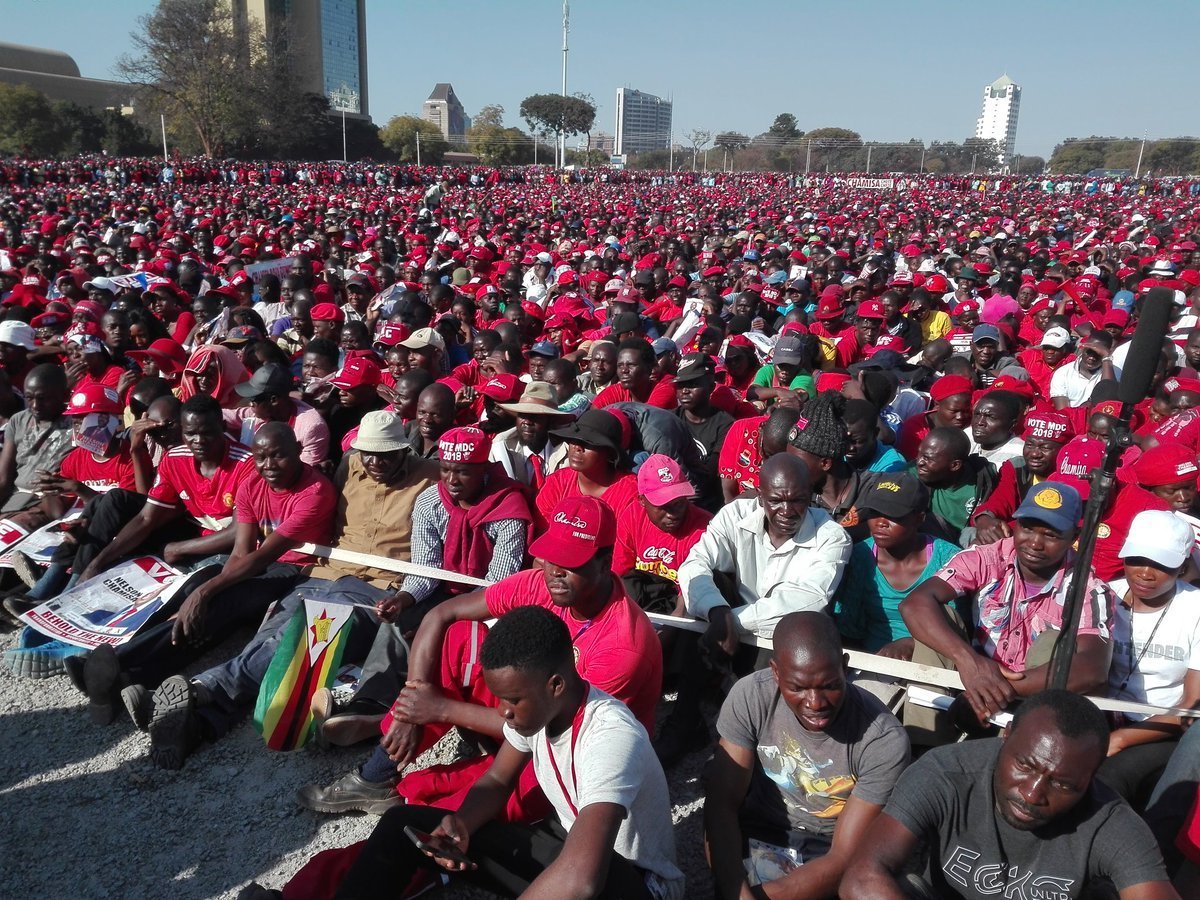 Zimbabwe’s political parties made a last-ditch pitch for votes on Saturday ahead of July 30 elections as a campaign distinguished by the absence of widespread violence that marred previous contests drew to a close.

A credible vote and an acceptable result would serve as a foundation for the southern African nation to rebuild its battered economy and relations with the international community after two decades of misrule and political turmoil under Robert Mugabe.

Both the ruling party and main opposition have pledged to create jobs, promote growth, attract foreign investment and bring an end to the corruption that characterized the Mugabe era.

The ruling Zimbabwe African National Union-Patriotic Front, now led by President Emmerson Mnangagwa, who took office in November after the military took charge and Mugabe was forced to quit, held its final mass rally at the National Sports Stadium in the capital, Harare.

Most urban centres are strongholds of the opposition Movement for Democratic Change, and the 60,000-seat venue was about two-thirds full. Party supporters were presented with green caps, T-shirts and scarves upon arrival.

“This is a new Zimbabwe, a new era,” Mnangagwa told the cheering crowd.

He noted that he’d “opened the democratic space,” allowing all parties to campaign freely for the first time, before warning international observers to “just do your work and don’t interfere in our country’s politics.”

“Mugabe is in the past,’’ she said at the ruling party rally. “People will forgive Zanu for what went wrong. Mnangagwa has begun improving things. He is promising us jobs.”

A few miles away, tens of thousands of enthusiastic MDC supporters dressed in the party’s red T-shirts and caps converged on Harare’s Freedom Square. The crowd was dispersed over a large area and its size was difficult to estimate.

“We know the current government is clueless and directionless,” said Nelson Chamisa, the MDC’s leader, who was mobbed when he arrived at the gathering. “Change is inevitable and unstoppable.”

Under Zimbabwean law, campaigning must end on Saturday. More than 5.6 million people have registered to vote for a new president, lawmakers and local government representatives.

Mnangagwa, 75, a former deputy president and spy chief, and Chamisa, a 40-year-old lawyer and church pastor, are the stand-out favourites among 22 candidates contesting the presidential race. One candidate dropped out late Friday.

‘Sick and Tired’
“Chamisa is the face of the younger generation,” said teacher Samuel Tayengwa, 27, who attended the MDC rally.

“Mnangagwa is the same as Mugabe. We are sick and tired of lies. Let us change the people who lie to us.”

Mnangagwa has a clear edge when it comes to funding – his image adorns billboards and thousands of posters, including two giant ones affixed to the sides of Zanu-PF’s 15-floor headquarters in Harare.

Mugabe was declared the winner of every election in Zimbabwe held since white-minority rule ended in 1980.

The MDC alleges the last three votes were stolen and that its supporters were subjected to murder, rape and arson by members of the security forces and ruling party militia.

‘First Step’
That violence led to targeted sanctions against some members of Zanu-PF and they could be lifted if Zimbabwe returns to the rule of law.

Free and fair elections are a “first step” toward that process, the U.S. embassy in Harare tweeted Saturday, citing Senator Jeff Flake who will monitor the vote alongside American observers.

Despite being peaceful, this year’s contest has been controversial.

The MDC says the voters roll is defective, controls over ballot papers are inadequate and the electoral commission is biased in favour of the ruling party — allegations the body denies.

In the Balance
The only significant opinion poll was conducted by research company Afrobarometer, which surveyed 2,400 adults between June 25 and July 6.

Forty per cent of respondents said they would vote for the ruling party, 37 per cent backed a seven-party alliance led by the MDC, 3 per cent supported other parties, and the balance was undecided.

A runoff election will be held on Sept. 8 if no candidate wins more than half the vote.
Bloomberg

The curtain closes on election campaigns as Zimbabwe prepares to vote