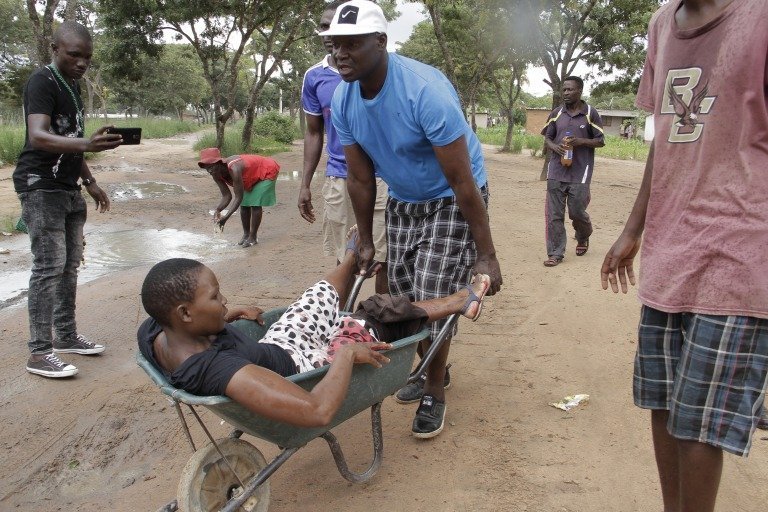 Zimbabwe police have fired live ammunition and teargas during running battles with groups of young people trying to enforce a nationwide shutdown to protest against the rising cost of living.

The clashes were the worst outbreak of disorder in the southern African country since the aftermath of elections last year when six civilians were shot dead by police.

They came on the first day of a three-day general strike called by unions amid an intensifying economic crisis.

There were clashes in the capital, Harare, and in Bulawayo, a city in the south, as police attempted to disperse groups of youths who had lit fires in streets, erected barricades and, in some cases, looted shops.

Other protesters blocked highways and tried to force companies that had remained open to comply with the shutdown.

In Chitungwiza, a satellite town of the capital where anti-government feeling runs high, a police station was reportedly besieged and automatic gunfire was heard.

In the poor neighbourhood of Mabvuku, four civilians were reportedly shot and injured by police.

One catalyst for the discontent was the government’s decision to increase the price of fuel by 150% on Saturday. There are already acute shortages of imported goods and soaring inflation for basic foodstuffs.

Legacies of the 37-year rule of Robert Mugabe, which ended with a military takeover in November 2017, include massive unemployment, huge government debts, an acute shortage of hard currency and a crumbling infrastructure.

“We have suffered enough,” said Philani Nyoni, an author who was part of the protest in Bulawayo. “The government is now aware that we are not happy with their stupid policies like the fuel price increase.”

President Emmerson Mnangagwa, a stalwart of the ruling Zanu-PF party who took over on Mugabe’s resignation and won contested elections in July, has been unable to bring about the economic turnaround he promised voters and investors.

“We are now seeing the results of volatility that has been building for some time and that everyone has been very complacent about,” said Piers Pigou, an expert in Zimbabwe with the International Crisis Group.

The main opposition party, the Movement for Democratic Change, issued a call for calm and said it was “in solidarity with peaceful citizen action across the country today”.

“We have warned this government that there is a need for dialogue and nothing has happened. This is what happens when you push people,” said Jacob Mafume, an MDC spokesperson.

The government has accused the strike organisers of pushing a political “regime change” agenda and engaging in “subversive political activities”.

“It has become obvious that there is deliberate plan to undermine and challenge the prevailing constitutional order,” said a government spokesman, Nick Mangwana, in a statement late on Sunday night.

He said the government would “respond appropriately” against “all those who have been conspiring to subvert peace, law and order in the country”.

The mainstream opposition in Zimbabwe appeared to have been taken by surprise by the disorder.

“The opposition appears not to be in charge of leading this,” said Pigou. “The conditions are such that there is a real opportunity for violent disruptive elements, either from within the opposition ranks or some kind of destabilising operation.”

Mnangagwa has struggled to revive Zimbabwe’s ailing economy and is currently travelling in Asia and Europe in an effort to attract foreign direct investment.

Although the 2018 elections were not marred by the type of violence experienced under Mugabe, alleged irregularities during the count and repression after the vote resulted in lukewarm support for Mnangagwa and Zanu-PF from major international powers.

Early efforts by the government to stabilise Zimbabwe’s economy appear to have exacerbated the situation, triggering a massive devaluation of its surrogate and electronic currencies.

The country abandoned its own currency in 2009 after it was wrecked by hyperinflation and adopted the dollar and other currencies such as sterling and the South African Rand.

But there is not enough hard currency in the country to back up the $10bn of electronic funds trapped in local bank accounts, prompting demands from businesses and civil servants for cash that can be deposited and used to make payments.

Mthuli Ncube, the finance minister, told a town hall meeting on Friday the new local currency would be introduced in less than 12 months.

Zimbabweans are haunted by memories of the Zimbabwean dollar, which became worthless as inflation spiralled to reach 500bn per cent in 2008, the highest rate in the world for a country not at war, wiping out pensions and savings.
The Guardian

Canadian sentenced to death for drug smuggling in China

Alrosa Is Going Back to Zimbabwe