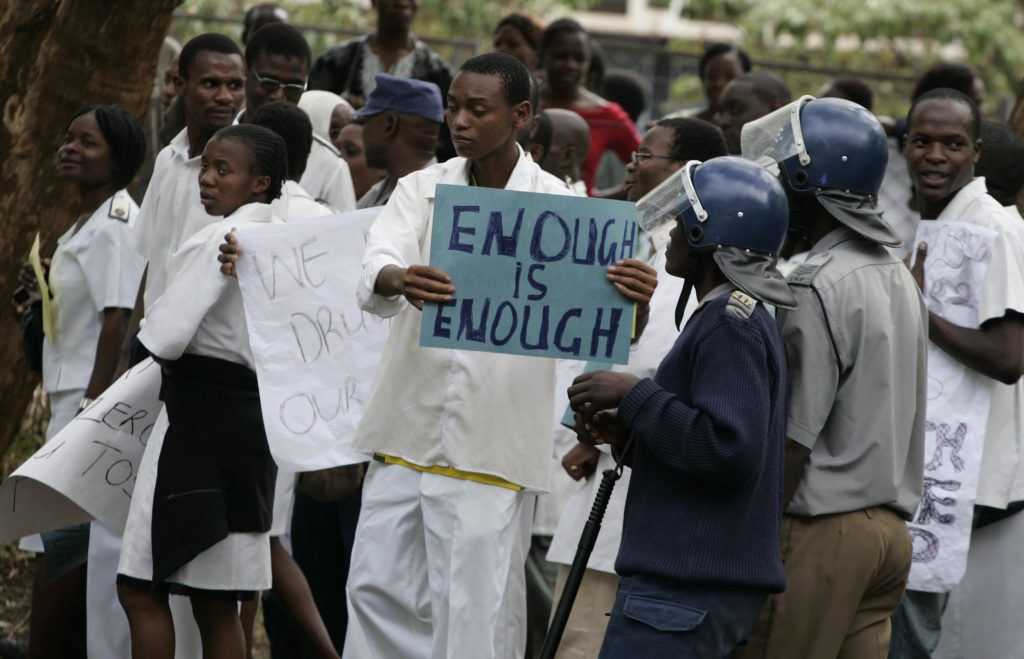 Senior doctors in Zimbabwe have joined the strike started last month by their junior colleagues who are demanding to be paid in US dollars as that country’s surrogate currency – bond notes – rapidly lose value and face growing market rejection.

Junior doctors downed tools a month ago on 1 December and on Wednesday their seniors announced they were joining the strike worsening the already dire health situation exacerbated by the critical shortage of imported medicines.

Poor working conditions, low salaries in bond notes and shortages of basic medicines and equipment are the reasons behind the work stoppage that has left patients in state hospitals unattended.

Zimbabwe’s economy is in meltdown, shortages of foreign currency have seen basic commodities disappear from shop shelves and queues for fuel have become the order of the day. Banks are unable to meet withdrawals and cash is perennially in short supply.

In Wednesday’s memorandum to the country’s major referral hospitals and copied to all heads of departments and the health and child care ministry, senior doctors said they were now overwhelmed by the workload.

“Following the continued industrial action by the junior doctors and their subsequent suspension, we, the senior registrars, have become overwhelmed by the workload and are no longer confident we can discharge our duties properly without compromising both our and patient’s safety” the memorandum read in part.

“Our work involves working as a team and so if the other crucial part is missing, then we are all rendered useless.

“We share the same grievances as our juniors, that of the need for a cost of living adjustments, need for uninterrupted availability of essential drugs and sundries and the need to address the vehicle status of all doctors.

“We have resolved, therefore, as a group to protect our patients and ourselves to withdraw our services until an agreement is reached.”

The move by senior Zimbabwe doctors comes at a time the government is negotiating with junior doctors, despite announcing that they had suspended about 550 striking medics, whose actions the labour court ruled as unlawful.

With no end in sight to the strike, President Emmerson Mnangagwa this week announced he was cutting short his annual leave to deal with the matter, amid threats of industrial action by teachers.

Related Topics:StrikeZimbabwe doctors
Up Next